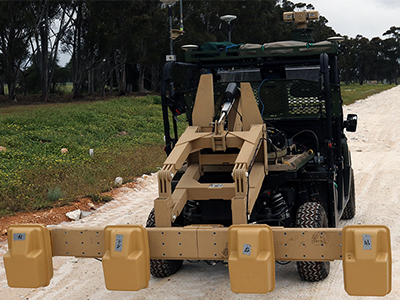 The Polaris vehicle and sensor.

Vehicle-mounted ground-penetrating radar (GPR) equipment has been used by the ADF to detect Improvised Explosive Devices (IED) for several years, but there remains much room for improvement in the signal processing component of the technology.

A recent trial between the US and Australia provided the opportunity to test the performance of vehicle-mounted GPR equipment on different soil types, says Defence researcher Canicious Abeynayake.

“Defence’s areas of operation change from time to time, so we need to have algorithms that are robust enough to work well with different soil types,” Abeynayake explains.

“Countries using the GPRs have recognised the need to optimise and enhance automatic target recognition algorithms to match local conditions and that’s why we wanted to test the equipment in different geographical locations.”

The eventual aim is to have a fused approach to IED detection – combining the strengths of mature IED detection technologies such as cable detection, metal detection and radar.

“If we can combine all three we can improve detection probability and reduce false alarms. That’s our aim,” says Abeynayake.

Trials pave the way for improvement

The major challenges in IED detection using GPR are caused by the localised variation in terrain and climate, and the variety of IEDs encountered. Predicting GPR performance in diverse operational scenarios requires understanding the capabilities of GPR in relation to the physical properties of soils.

Over six weeks the teams drove the US Polaris and ADF Husky GPR vehicles up and down lanes of Australian soil at sites across Australia that had been seeded with objects representing IEDs. The accumulated raw data will be used to assess improvements to the processing algorithms.

Abeynayake says the Defence Science and Technology (DST) team will be investigating the algorithms at the lowest level to see which components are underperforming in different soils and against different targets.

The quality of the signal processing algorithms plays a very important role in the ultimate effectiveness of a GPR system by transforming signals into meaningful information for the operators.

Yet Abeynayake says some current approaches to target identification in GPR lack a solid theoretical basis in the underlying physics, which is fundamental to understanding the responses from GPR.

“Only when target and clutter characteristics are both well understood can signal processing be applied effectively,” Abeynayake explains.

“As targets of interest and operational environments keep changing we need ongoing research into advanced sensor configurations and algorithms.”