Orchestrating threats and countermeasures for the theatre of war 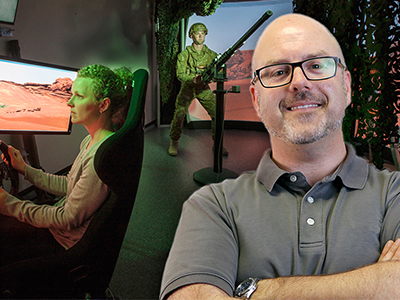 The Integrated Survivability Assessment Facility (ISAF) at DST measures the survivability of operational platforms (such as aircraft and land vehicles) employing countermeasures against various weapon threats.

It is primarily used by a variety of Defence scientists and uniformed personnel in the development and validation of countermeasures and operational tactics.

In order to understand the survivability of a platform, Defence scientist Bjorn Wharff and his colleagues at DST scrutinise the target platform. They look at on-board sensors, consider priority threats that might engage the platform and assess countermeasure systems (such as threat warning and flares) that form part of the platform's self-protection suite.

"Then we can add in the human," says Wharff.

"The human element may not always be relevant but it is for specific kinds of experimentation such as situational awareness effectiveness and tactics analysis."

A complementary, interconnected facility is the Virtual Threat Lab which offers different threats such as heavy machine guns, grenade launchers and shoulder launched and laser guided missile systems. These are modelled using life-like physical props and validated munition models. The systems can be used by human operators or scripted to engage platforms in the ISAF or from elsewhere.

The Australian Defence Force (ADF) wants to know what the best course of action is once a platform is shot at.

"We have conducted trials using ARH Tiger and MRH-90 (helicopter) pilots in the ISAF where we have been able to assess platform sub-system performance and evasive manoeuvres against artillery threats," says Wharff.

"Afterwards we have been able to derive results and report on the effectiveness of different elements such as threat warning, situation awareness (visual, aural and tactile) and manoeuvres."

The VTL has had a vehicle simulator installed to help support the ADF's LAND 400 and similar programs. This simulator will enable scientists and Army tacticians to understand how best to counter Anti-Tank weapons such as laser guided missiles.

In recent times, Wharff's team has been revising the ISAF architecture so that scientists and military operators can access the facilities remotely.

Researchers can use Mozart to design any engagement that they are interested in, place a helicopter here and a threat there, and the system will automatically go and manage all the infrastructure required, run the job and return the results using the highest confidence inputs available.

"Automating the entire work flow has never been done before using a distributed simulation infrastructure, and we've done it," explains Wharff.

"At the end of the day, "Wharff says, "The ISAF is about providing Defence personnel with a tool to analyse how well their platform will perform against various realistic threats."