Helping pilots know up from down 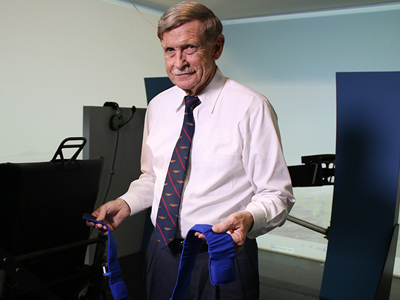 DST scientists have been working with a US expert in spatial disorientation to enhance the safety of pilots.

Angus Rupert, the 2017 Fulbright Distinguished Chair in Advanced Science and Technology worked alongside DST researchers for seven months exploring how multi-sensory cueing technology can be used to help reduce the spatial disorientation experienced by pilots, astronauts and divers when operating in conditions of poor visibility.

According to a US Department of Defense report, for every military platform lost to enemy action in Iraq and Afghanistan, four were lost due to spatial disorientation associated with degraded visual environments.

Rupert's work, recently featured on the ABC, focuses on the use of tactile stimulators (tactors) to provide flight information to pilots in poor visibility. These tactors, embedded into a garment worn by the pilots like a belt, vest or harness provide information such as aircraft position, attitude, altitude, acceleration and velocity.

"Your sense of spatial awareness can be easily confused if your visual references are compromised," explains Rupert.

"This tactile system reduces a pilot's dependence on visual cues and instead, uses the sense of touch to provide situation awareness and information."

"The most important information we can give a pilot is 'where is down'."

Rupert developed his Tactile Situation Awareness System (TSAS) in the early 90s while assigned to the Johnson Space Center at NASA in the US. Originally the system was designed to counter the sensory motor problems experienced by astronauts such as spatial disorientation and motion sickness. Twenty-five years later, the system continues to evolve as technologies become more advanced.

A flight demonstration of the tactile cueing technology was recently undertaken in a Chinook helicopter, with positive results.

In a concurrent program of work, DST is working with the University of Canberra on a version of the tactile cueing technology that can cue a gunner in the aircraft to the bearing of potential threats.

The full online story by Norman Hermant is available on the ABC website.