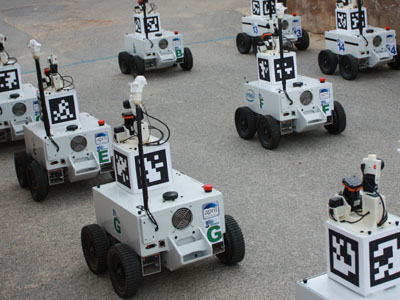 The first Defence Cooperative Research Centre (CRC) for Trusted Autonomous Systems is formally launched in Brisbane today at the International Conference on Robotics and Automation (ICRA) 2018.

Minister for Defence Industry, the Hon Christopher Pyne MP, welcomed the CRC which was established under the Next Generation Technologies Fund.

"I am pleased the first Defence CRC, which is focused on trusted autonomous systems, has got off to a fitting start at the world-leading International Conference on Robotics and Automation," Minister Pyne said.

"The Defence CRC allows Australia's industry and research sectors to collaborate with Defence on leading edge technologies such as autonomous systems to maintain the ADF's capability advantage."

The Defence CRC has been established to research and deliver game-changing autonomous technologies to Defence, ensuring trusted and effective cooperation between humans and machines.

Minister Pyne said the CRC program is a tried and tested model with a proven track record in translating research into capability.

"Not only will Defence benefit with new capabilities, Australian industry will improve its expertise and competitiveness in autonomous technologies," Minister Pyne said.

"I look forward to the CRC making a vital contribution to advances in autonomous systems for Defence capability."

To be headquartered in Brisbane, the Defence CRC for Trust Autonomous Systems is chaired by Mr Jim McDowell, Chancellor of the University of South Australia.