Upping the IQ of Army communications 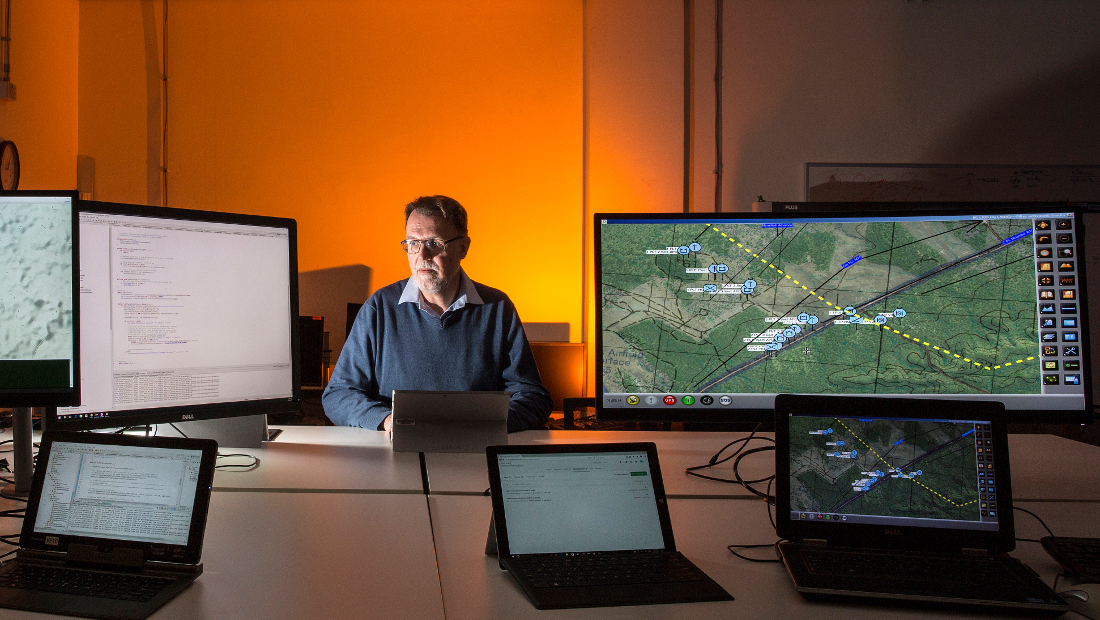 In the old days of voice radio networks, things were much simpler.

Recall the scene from countless movies where the Army signaller in the heat of battle calls for urgent air support. He had control, was acutely aware of the battle context and what information needed to be transmitted, and got immediate feedback about the state of the voice radio network (by the presence or lack of voice acknowledgement).

But since the advent of digitisation of the tactical network, the data deluge has become too much for humans alone to manage. There are just too many decisions to be made. Should the network be reporting enemy locations, sharing friendly force locations or requesting assistance with casualties? Calling for fire support or downloading the latest software update?

Greg Judd and Keith French, members of DST's Systems Integration and Tactical Networking (SITN) team, have been working with the Army for many years. Their research into smarter networking systems arose from their involvement in the operational test and evaluation of the new Land 200 battle management systems (BMSs), where they saw firsthand some of the issues that Army is trying to cope with.

"The idea came to us that we need to automate things," says Judd. "SMARTNet (Semantically Managed Autonomous and Resilient Tactical Networking) was born as a way to improve the functionality of the BMS."

French explains the subtle difference between their aim and that of other DST teams developing ways to ensure the resilience of the physical side of the network. "We are trying to ensure resilience in the information that is being communicated. What we want is to be given any network, and then to add in some software smarts to give a greater surety of information transfer. In other words, to satisfy the general information management mantra across all levels of Defence: right information, right person, right time."

Why is dynamic tactical communication management so difficult that it's never been attempted before? In the land battlespace environment, Judd says the communication infrastructure is not fixed. "There are no base stations you can rely on like a mobile phone network. It's fragile because all the links use combat net radios that drop out and are continually on the move."

Adds French, "Your adversaries are also trying to jam your communications. Everything is against you. It's just not an environment where you can send lots of data because it's not going to get through in a timely fashion."

The answer is to distil the data and send the highest priority information first. Less important data can then get through eventually. To be able to transform the data, and to link into the radio hardware, the SMARTNet team is calling on the skills of others in the field. A partnership has been established with US Army Research Labs (ARL) scientists who are now conducting research under the SMARTNet banner.

Understanding the state of the network

Along with transforming and prioritising data, the third aspect is understanding the state of the network so that SMARTNet can dynamically "throttle" the amount of data being transmitted. "The network state will be continually changing as the battle context changes and if we send too much data at the wrong time the network can seize up," says French.

"So the two main research thrusts at the moment are computational intelligence and assessing the state of the networks. How does SMARTNet determine the current battle context and reason about it? "It's important for SMARTNet to know if I'm in an assault phase and in contact with the enemy. How does it come to realise this fact and, once it does know, how should it use that knowledge to best transform, prioritise and throttle the flow of information – that's the challenge."

Judd says the second thrust is developing techniques to assess the state of the network and understand the implications. "Let me emphasise, the reason this hasn't been done before in any other country, is that dynamically prioritising information over a tactical network is difficult. How can we find out what the network is doing without clogging it up?"

To solve these challenges, the SMARTNet team has been doing some deep thinking, in conjunction with colleagues at the University of Adelaide's Centre for Distributed and Intelligent Technologies who are looking at the artificial intelligence side of things. The university's Centre for Defence Communication and Information Networking (CDCIN) has also joined the fray. And the team is partnering with Consilium Technology, a small to medium size company with experience building and commercialising Artificial Intelligence-based systems.

The four year strategy is to gradually build up the fidelity and capability of the SMARTNet middleware. "We'll be verifying and validating our concepts initially through a simple simulator, ramping up to more complex emulations and finally running field trials using real kit."

The ARL team will be with them for the journey, and Judd is particularly looking forward to using the impressive ARL tactical network emulators to evaluate SMARTNet algorithms. "It will be important to know that we are leading to improvements over the way the battle management system works now. But SMARTNet over real radios will be the ultimate test, and for that we have field experiments planned in the US in 2020 and Australia in 2021."