The next generation soldier – towards 2035 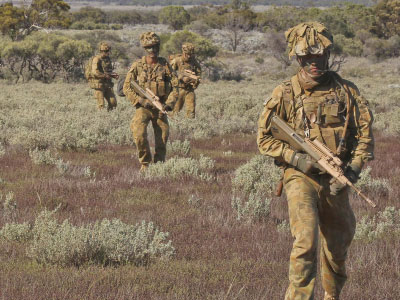 Concepts which once belonged to the realms of science fiction are becoming a reality for Australian soldiers, thanks to pioneering work being undertaken by DST scientists.

Tim Bussell and his Integrated Personnel Protection team are exploring how next generation technologies could be used to enhance the performance and protection of soldiers in the future.

Drawing on significant advances in materials science, sensor technologies and autonomous systems, the team is exploring what the next generation soldier might look like.

The team is focusing on the dismounted foot soldier whose protection and offensive capability is largely limited to what can be carried or worn.

Bussell says, “Technology has advanced to the point now where we can provide significantly enhanced protection to dismounted combatants by making them harder to detect, improving the protective qualities of their uniforms and even removing them from the immediate threat altogether, using autonomous technologies.”

The classic approach to soldier protection is, in its most simplistic form: don’t be seen; if you’re seen, don’t be hurt, but ideally, don’t be there. 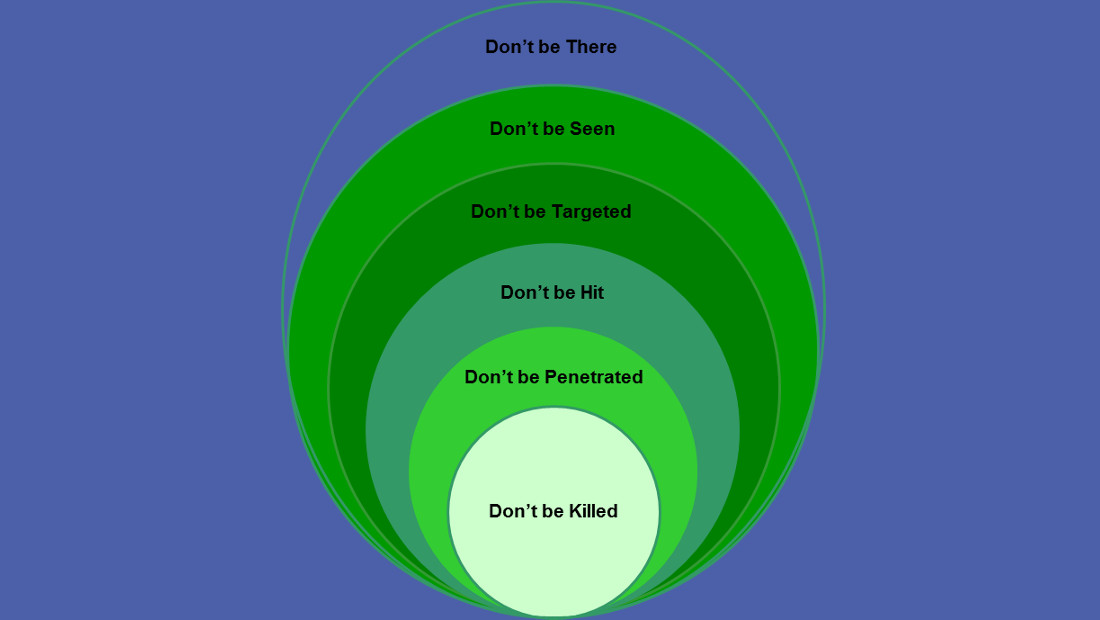 A layered approach to soldier protection

DST is looking at how cutting-edge technologies may be exploited to enhance the ways in which we can provide these layers of protection to the combatant.  “It’s about looking at things differently, not just continuing to do what we’ve always done, that gives us an opportunity to radically change the way in which dismounted combat operations are conducted,” says Bussell.

The rapid advancement of sensors and sensor-platforms (think satellites and drones) is putting dismounted soldiers and deployed high value assets at greater risk of detection.

Bin Lee, a camouflage expert, is leading a research effort in advanced signature modelling and simulation capabilities to better inform the development of camouflage solutions.

It is no longer practical to assess all combinations of threat and countermeasures in the field using conventional methods based on human observer trials.

Instead, the team is developing a capability to create virtual environments where signature assessments can be made.

The Lelantos work program led by Lee, draws on many specialist areas across DST to build a system that makes it possible to visualise objects in a realistic, dynamic, three-dimensional, virtual environment.

Populated with a library of ground truth spectral data of representative materials, operational background environments and weather conditions, this virtual space will make it possible to assess the vulnerabilities of proposed camouflage solutions at the click of a button.

“Once we know what something looks like in a particular scenario, we can design better camouflage treatments or more realistic distraction techniques,” Lee explains.

Fabrics, materials and textiles are not often thought of as high-tech, but with the ever evolving technological advances in materials science and innovative concepts, that might all be about to change – particularly if Ahmed Bhoyro and his multi-functional materials team have anything to do with it.

By applying the very latest developments in materials science, the team is looking at how a soldier’s uniform can be more than just a layer of clothing.

“We’re looking at everything from camouflage materials to ballistic protection to in-built first aid,” Bhoyro explains.

Imagine clothing that rapidly constricts to become a tourniquet or opens and closes its fabric structure in response to the environmental temperature and humidity. Picture a uniform that changes its camouflage pattern and colours to adapt to lighting conditions, a self-sustaining non-powered lightweight undergarment that heats and cools the body under any conditions, or materials that provide protection as well as store electrical energy.

These are all current and developing capabilities within the Osiris work program, led by Bhoyro.

Notwithstanding the significant advancements in protective clothing and signature management, the best protection for our troops is to distance them from high-risk situations.

Melanie Ralph and Michael Ling are leading a team exploring soldier autonomy to achieve just that.

“It’s all about projecting the presence of the soldier,” Ralph says.

“Autonomous technologies give us the ability to increase both situational awareness and the separation between a dismounted soldier and the point of first contact. “

The team is looking at integrating nano and micro, tactical autonomous systems into the soldier combat ensemble to provide an ‘advance guard’ capability.

These small autonomous vehicles, small enough to fit into the palm of your hand, would be docked within the soldier’s combat ensemble. When required, the soldier would deploy the airborne or ground-based vehicle (UXV) to gather vital reconnaissance information and intelligence. Using specialised sensors and a tactical communications link with the dismounted soldier, the UXV would provide mapping capabilities, vital intelligence, hazard assessments and most importantly, standoff protection.

While commercial autonomous technologies exist and are quite advanced, the application of these technologies in a military context for the dismounted combatant is still in the early stages.

The team is looking at three key areas in the Athena work program: power and energy, specifically energy harvesting and storage; situational understanding, including how augmented reality and digital mapping might be used to provide a “forward scout” capability; and soldier-machine systems, focusing on control and the soldier-machine interaction.

An important consideration is allowing the dismounted soldier to maintain control and interaction with the UXV, without distracting him or her from the surrounding environment. This means developing  intuitive control systems, and prioritising the amount of information received and how it is presented to the soldier.

DST’s vision of the next generation soldier is one shared and strongly endorsed by Army.

“This is an important body of work,” says Army’s Director General of Future Land Warfare Brigadier David Wainwright, “and we are working closely with DST to deliver technologies that will give our soldiers a capability edge.”

Former Chief of Army Lieutenant General Angus Campbell  (now Chief of the Defence Force) echoed that sentiment, saying that Australia’s relatively small army (approximately 45,000 personnel) needed to be padded out with robotic and autonomous systems in order to be an effective force in the future.

He said that autonomous systems and artificial intelligence were becoming an increasingly important part of military landscape, and called on scientists and Defence industry to ensure that Australia kept pace.

“They are part of a wave of technological development that will change our world. As with any approach there are choices in how we handle it. We can ignore it, pursue more of the same and risk being left floundering in the wake,” he said.

“Or we could start paddling now.”

In keeping with the metaphor, it would seem that the DST team is riding the bow wave.

For optimal viewing, choose to Watch on YouTube.com