Pushing the boundaries for battlefield forensics 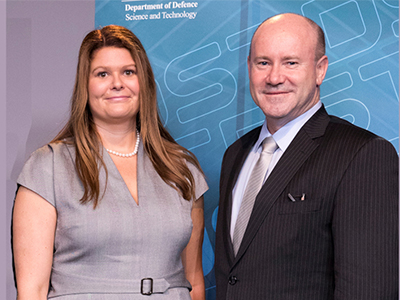 Wilson, who has managed forensic science in DST's National Security Science and Technology Centre, applied for the fellowship because she wanted to seek the most effective framework for Defence to manage its important battlefield forensics capability.

Battlefield forensics is a combination of forensic science and technical exploitation, with the main objective of preventing and disrupting events and providing force protection. The 2016 Defence White Paper calls for comprehensive situational awareness to protect Australia's deployed troops, and battlefield forensics is one avenue of achieving this.

"One of the main reasons I wanted to undertake this fellowship is because the current system is complex – it's a set of divergent capabilities that aren't integrated at a joint or whole-of-government level," says Wilson, who turned to modern organisational theory, and for the first time considered forensic science as a system of systems. She showed how forensic science is a subsystem within the larger systems of the criminal justice system, law enforcement and military and intelligence systems.

To ensure Defence does not end up with siloed forensic and technical exploitation capabilities Wilson recommended to the Secretary of Defence that battlefield forensic science be managed using a system of systems framework at a whole-of-government enterprise level. After significant liaising with stakeholders, the proposed way forward is for forensic and technical exploitation to fall under the Joint Force Authority of the Joint Counter Improvised Threat Task Force (JCIT TF).

Wilson is happy with the solution, which meets Defence's First Principles Review objectives of a more unified and integrated capability with a centralised authority, a clear strategy and a structure that enables efficiencies.

Outputs from Wilson's fellowship include seven publications, a plenary address to the Australian and New Zealand Forensic Science Society Symposium, and on-going collaboration with the US to produce the Five Eyes Forensics and Technical Exploitation Handbook.

The US Defence Biometrics Agency has informed Wilson that, after reading her research, it will be implementing a system of systems design to synchronise their enterprise. What this means is that Defence will not only be aligned with the Five Eyes community, Australia will actually be leading the development of the system of systems approach to forensic science.

The Secretary of Defence Fellowship supports innovative postgraduate research that contributes to Defence outcomes. Wilson was the third DST recipient, following on from Ms Elena Mazourenko and Dr Greg Calbert.