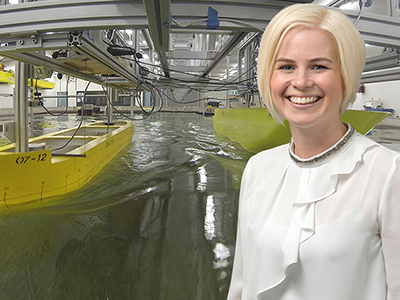 Mathew was at the helm of recent experiments at the Australian Maritime College (AMC) supporting the RAN’s Landing Helicopter Dock (LHD) platform, specifically understanding the forces at play during LHD replenishment at sea. After her findings were published in the journal of the UK-based Royal Institute of Naval Architects (RINA), Mathew and her AMC co-authors received the RINA Wakeham Prize for top RINA paper* in 2018 by scientists under the age of 35.

Mathew is a member of the DST team charged with analysing ship stability, sea-keeping and operational loads to support the RAN. Much of her team’s research takes place at the AMC, using scale models of RAN vessels in specialised facilities including the Towing Tank and Model Test Basin.

With a push in recent years for RAN vessels to remain in task groups and in operations at sea for extended durations, replenishment at sea (of fuel and to a lesser extent solid goods, and even personnel by a flying fox type setup between ships) is a regular occurrence. It is also one of the most dangerous activities undertaken by navies during peace time, which is why the RAN needs to know all it can about the activity and how to make it safer.

Apart from replenishing our own vessels, the RAN also conducts operations with other navies which have vessels that need replenishing at sea, and our RAN vessels need to be replenished by allied navies. So the comprehensive study used models to find out exactly what hydrodynamic interactions take place.

Replenishment takes place at speeds of 12-14 knots, with the vessels in close proximity. When large platforms like these move within 40-60 metres of each other, the motion of one creates waves which impact on the other, and vice versa.

“That impact is dependent on speed, size, shape and displacement of the vessels,” she says. “The supply vessel is shorter than the LHD by approximately 17%, but it displaces almost 16% more than the LHD. During replenishment both vessels’ displacements change, as one ship gets heavier and the other lighter. That change is significant, as the vessels take on quite different hull shapes in the water.”

Analysis of the trial data indicates that the motions of the supply vessel were generally larger than the LHD. It was found that hydrodynamic interactions can lead to large supply vessel roll motions in head seas, and Mathew and co-authors suggested directions for future research.