Eliminating the scourge of chemical weapons 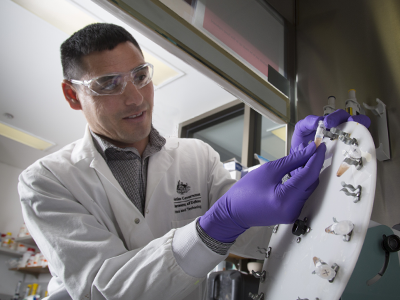 Dr Craig Brinkworth working with samples in the lab

Since the First World War when more than 90,000 soldiers suffered agonizing deaths from exposure to chlorine, phosgene, mustard gas and other chemical agents, and close to a million others were left with debilitating injuries, chemical weapons have been abhorred by most countries, and are broadly regarded as being an unnecessarily cruel and unfair method of warfare.

However, despite almost universal condemnation, the threat of chemical warfare continues to exist.

Towards the elimination of chemical weapons

DST scientists have supported international efforts to obtain a total and comprehensive ban on the development, production, stockpiling and use of chemical weapons since the early 1980s.

These efforts have included providing scientific advice to diplomats from the Department of Foreign Affairs and Trade during the negotiation of the Chemical Weapons Convention, and, later, supporting the Organisation for the Prohibition of Chemical Weapons (OPCW), the international agency tasked with the implementation of that convention.

A critical part of the support provided by DST is the development of methods to accurately analyse chemical warfare agents and their degradation products. This analysis capability is necessary for the effective verification of the provisions of the Chemical Weapons Convention, including the destruction of all existing stockpiles of chemical weapons and investigations into their alleged use.

Designated laboratories – the linchpin of the verification regime

One way in which the OPCW has ensured that it can maintain a capacity to investigate allegations of chemical weapons use is through the establishment of a network of OPCW designated laboratories.

DST is one of a relatively small number of laboratories among the 193 member states of the Chemical Weapons Convention that has earned the status of 'designated laboratory' with the OPCW, achieving designated laboratory status for the analysis of biomedical samples (plasma and urine) in 2016.

"To achieve and maintain designated status for biomedical samples, we must successfully complete annual proficiency testing across two consecutive tests. Failure of any subsequent test results in loss of this status," he explains.

The team is given 15 days to analyse samples and report their results.

"The samples we receive may be spiked with compounds at concentrations as low as 4 parts per billion, so we need to be sure that our techniques are both sensitive and accurate."

From biomedical to environmental samples

Having achieved designated status for biomedical samples, DST is currently working towards achieving designated laboratory status for the analysis of environmental samples.

With proficiency requirements for analysing biomedical samples satisfied, Dr Brinkworth and his team are now waiting for the legal agreements to be put in place to enable them to start receiving samples obtained during OPCW inspections. It is anticipated that these agreements will be in place in the near future.