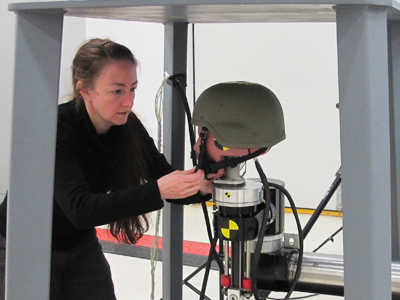 Soldiers in vehicles subjected to underbelly blasts can sustain serious head and neck injuries caused by their head impacting the interior roof of the vehicle.

DST's Dr Melanie Franklyn, an expert in the biomechanics of injury, wanted to determine if retrofitting foam padding to the upper interior of the cabin could help mitigate the risk of serious injury.

"When an IED detonates beneath a vehicle, the blast doesn't always breach the vehicle's hull," Dr Franklyn explains.

"Instead, the force of the blast can deform the structure of the vehicle, propelling the occupants upwards and into the roof with considerable force.

Brain injury acquired through military service is a concern for Australia and its allies, with a number of returned service men and women suffering some form of traumatic brain injury, typically caused by a motor vehicle accident, gunshot wound, fall or improvised explosive device.

Such injuries can result in short or long-term memory loss, changes in behaviour, poor balance, dizziness and confusion; or in the most severe cases, death.

Aware that very few military vehicles have interior padding on the roof, Dr Franklyn wanted to determine if this relatively straightforward measure could make an impact on the risk of serious injury.

"Our aim was to determine if retrofitting energy absorbing foam to the interior of the roof could mitigate serious head and neck injury, and what effect wearing a military helmet would have."

Using test equipment provided by Holden Australia modified to accurately replicate the unique 'underbelly' blast effects, Dr Franklyn and her team tested three foams at five different velocities, conducting the tests with a headform both wearing and not wearing a military helmet.

"We found that foam padding actually had negligible effect on the potential for head injury, however wearing helmet was critical in preventing a serious injury or fatality."

Through their research, Dr Franklyn and her team were able to determine the impact velocities that are likely to result in serious head injury and identify how many impacts a helmet (either the helmet shell or the padding) could be subjected to before it loses its protective qualities.

"This data gives us a good indication of what blast magnitudes are significant in terms of causing serious traumatic brain injury, which helps in the development of protective measures such as the optimisation of helmet design for blunt impacts."

"Most importantly," Dr Franklyn says, "our study supports the requirement for soldiers to wear their helmet at all times in military vehicles in high-threat environments."