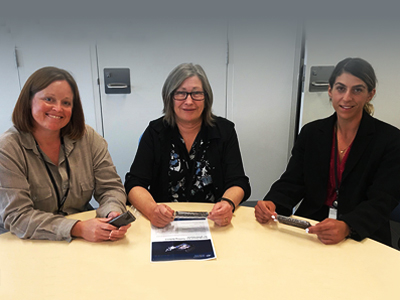 Defence scientists based at DST's Scottsdale site are developing and evaluating an eat-on-the-go, supplementary food bar for the ADF, with a focus on provision of adequate energy, micronutrients and gut health.

Optimal nutrition is essential for peak performance, and not getting enough energy and nutrients can lead to physical and cognitive deficits, adverse health problems and injury in the long term.

According to food technologist Jeanine De-Diana, it’s common for Defence personnel to have a nutritional intake below their required needs during strenuous training schedules and courses. “A common issue in the military, revealed by researchers around the world, is musculoskeletal injuries with one of the factors contributing to risk being poor nutrition, including not enough vitamin D and calcium.”

Supplementary food bar to the rescue

Development of the supplementary bar is just the latest in over half a century of food research, nutrition advice and ration pack development at Scottsdale. For this project, the team has been collaborating with the University of Tasmania’s Centre of Food Innovation and the US Army Natick Soldier Research, Development and Engineering Center (NSRDEC).

De-Diana explains that her role as a food technologist complements that of a nutritionist. “Nutritionists can explain the benefits of food types, whereas food technologists or scientists will create food recipes or specifications that deliver those benefits. If a nutritionist tells me ‘We need to add Vitamin D to a soldier’s diet, I will create food items that contain Vitamin D and calcium. The nutritionist determines what the person needs, we know what ingredients can be added, and how.”

So De-Diana joined nutritionist colleagues Bianka Probert and Rosa Peterson to discuss what would be most beneficial to the soldiers. The resulting formulation includes extra Vitamin D and calcium for bone health, aiming to reduce stress fractures during training. The bar has also been modified by DST in association with an Australian manufacturer to use ingredients available in Australia. The initial prototype reduces the proportion of rice crisps, removing the fructose, and adds Australian green banana flour as the main ingredient. “Green banana flour is a type 2 resistant starch, shown to be high in fibre and beneficial for gut health,” says De-Diana. “It releases energy a bit later as it goes thorough the gut.”

“Our initial bench trials in Scottsdale also helped refine the chocolate content and flavour, and incorporate supplementary vitamins and minerals.”

Field evaluations were then conducted to measure aspects such as sensory acceptability, satiety, and menu and flavour fatigue. This included extended use of the bar, consuming it every day for up to 10 days. Trials with Defence personnel took place at several locations in natural training environments.

“One key aim of the trials was to make sure that after consuming the chewy chocolate bar, levels of satiety were maintained over at least two hours, and they were. We also found good levels of acceptance of the taste.”

Evaluations with a broad range of user groups are on-going, with the results being used to verify suitability and functionality of the bar and to guide refinement of the formulation. Future research will investigate how dietary supplementation with resistant starch, probiotics and micronutrients affects physical and cognitive performance.