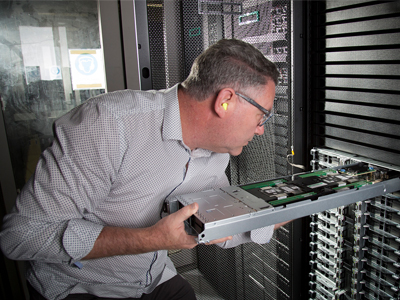 DST's John Taylor says that the high performance computing (HPC) service that DST is building for Defence is "game changing".

Game-changing is a phrase bandied about too often these days. But DST’s John Taylor says it’s an apt descriptor for the high performance computing (HPC) service that DST is building for Defence.

“It really will make a difference,” Taylor says, with confidence based on his experience of establishing and managing a HPC team at CSIRO. “Defence scientists will be able to run code thousands of times faster than on their high-end desktop computers. That means shortening the runtime for complex problems to realistic time frames, and tackling problems we couldn’t even dream of attempting on a desktop. High-performance computing offers are a whole range of advantages including accelerating the innovation cycle which is critical to maintaining competitiveness.”

Taylor likens high-performance computing to the equivalent of Formula 1 racing cars, compared to the Toyota Corolla. “These super computers tend to be one-off, unique designs tailored for specific needs and tuned for the best performance. Everything the HPC team does is designed to improve the performance of researchers’ codes.”

Strong support for the concept

There has been a massive uptake of HPC by universities and research organisations. It has become a tool of the trade and a way to deal with huge amounts of data and most areas of defence research will benefit from the new capability.

“Whether it’s modelling and simulation of a hypersonic object travelling through the atmosphere, or analysing the vast amounts of data from our modern weapon systems, datasets are now being described in petabytes, and will be rapidly expanding to collections and data sets measured in exabytes.”

Globally, major investments in HPC are occurring for machine learning and artificial intelligence (AI) that are used to support economies broadly, with strong interest from Defence organisations.

“Our HPC centre will play a key role in rapidly analysing huge volumes of data, being able to call on a significant number of the graphics processing units (GPUs) required by AI algorithms. Many of the programming interfaces will automatically pick up and use the GPUs, but we’ll also have a suite of libraries so researchers won’t have to completely rewrite existing code to access the benefits of the latest generation of high performance computing hardware that GPUs represent.”

Aiming for a place in the Fastest 50

DST is aiming for a top 50 spot in the list of the world’s 500 fastest computers. In November 2018 the IBM Summit supercomputer developed for the US Department of Energy was ranked #1, with a speed rating of 122.3 petaflops. One petaflop is a unit of computing speed equal to one thousand million million (1015) floating-point operations per second.

“Inside the top 50 is a suitable place for an organisation like DST to aim for,” Taylor says.

Taylor’s team has been operating a pilot high-performance computing capability at DST’s Melbourne site, with beta users helping to ramp up DST’s knowledge of how to operate a supercomputer in a secure environment, and just as importantly how to support and manage users efficiently.

Before you know it, high-performance computing power will be within the desktop reach of every Australian defence scientist.