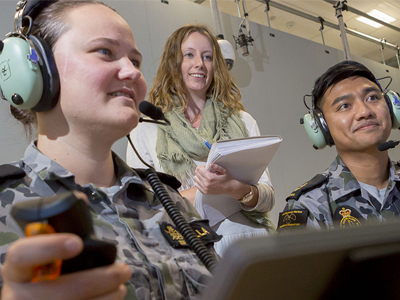 DST graduates Cassandra Heffernan and Tom Fahy were recently introduced to the world of defence science experimentation. They helped experienced practitioners Kingsley Fletcher and Susan Cockshell put Navy personnel through a series of tasks to explore the impact of working with uninhabited aerial systems (UAS) on crew performance and workload. This work is exploring the impact of different levels of integration between a UAS capability with radar, electronic support and electro-optic sensors and a ship’s own sensors within a combat system.

Earlier experiments used a low level of data integration. It was important to understand how increasing the level of integration would affect processes and performance, and that was examined in this experiment.

The experimentation was carried out in DST Edinburgh’s Combat System Integration Lab in a representative ship operations room. Navy operators were tasked with controlling two uninhabited aircraft, one fixed wing and one rotary copter, as Fletcher and colleagues ramped up the level of integration and observed the incremental flow-on benefits.

“Typically more integration increases efficiencies, but it’s also more expensive,” says Fletcher. “Navy are keen to know where the investment sweet spot is – the level of integration that gets the maximum performance benefits.”

Lessons learnt by all

Fahy, a mechanical engineering graduate, was responsible for creating the experiment scenarios including the placement of entities and all the specifications associated with each platform, using an in-house simulation system. He’s now mining the trial data to extract key performance metrics.

Heffernan spent a year with this team on a graduate industry placement last year. She was offered a defence graduate entry position earlier this year, after completing her studies in organisational psychology and human factors at Adelaide University.

“It’s been really good to be part of research taking place in a realistic and applied setting,” she says. “This experiment taught me a lot about how Navy works. I helped determine what the participants liked and disliked about the workload, and about the graphical information and controls. It’s a great position using all the skills I’ve built up at university.”

Fletcher, who has engineering and psychology qualifications, worked closely with DST’s simulation development team to create a simulated ship combat system incorporating many of the features of a real one.

The after scenario questionnaire captured some of the performance and interaction metrics of interest, supplemented by team debriefs in which they teased out the more nuanced likes and dislikes, strengths and weaknesses of the participants of the different integration levels.