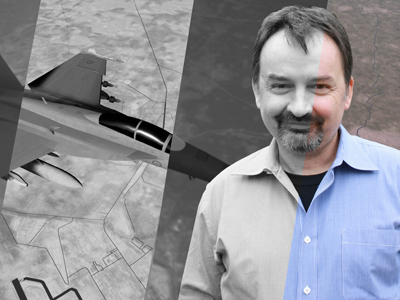 The journey of a unique piece of software developed by DST scientists has taken a new turn. Fifteen years ago, at the height of DST’s support to the ASRAAM missile program, Themie Gouthas joined a team that was evaluating the missile’s infra-red (IR) seeker sensor in a hardware-in-the-loop (HWIL) facility. The missile HWIL facility allows real missile hardware to be strapped in and stimulated with sensory input and flight control responses as if it believes it is attached to an airframe and flying in the real world.

To test the missile’s behaviour, realistic synthetic thermal images are needed. With no suitable option available off-the-shelf to test ASRAAM, the DST team saw an opportunity to do some in-house development to address the situation.

The VIRSuite software product was soon available, and was an immediate success. Development continued over many years into a bespoke and ever-expanding capability encompassing all simulation domains of interest to imaging seekers (i.e. land, air and maritime) and imaging systems including infrared, visible, and ladar. One thing led to another, and eventually to a partnership with Consilium Technology last year, and the ensuing commercialisation of VIRSuite into a product rebadged as “Infinite Studio”.

According to Gouthas, the software is well-accepted and in use by many research teams across DST in a variety of domains and areas including a virtual reality demo of JSF head mounted display, missile plume signature validation and Joint Strike Missile assessment. Moreover, DST’s international collaboration partner organisations in the UK, US and Canada have been adopting the software for their science programs.

“The significant and on-going investment in VIRSuite continues to have a significant impact on DST’s research,” says Gouthas. “By commercialising VIRSuite, the value to DST and the Commonwealth is being further enhanced. Local industry has benefited, and in particular, Consilium Technology has grown into a leading high-tech company by taking DST’s intellectual property, developing expertise around it, and taking it way beyond where it could have been taken by DST alone and thus contributing to science and technology in Australia.”

In recent times Gouthas has received some client requests from left field, including the use of the software to generate imagery to train artificial intelligence (AI) systems for tasks such as automatic target recognition and classification. Infinite Studio can easily generate millions of different perspectives of scenes with slight variations in rotation and slight variations in targets depending on the training requirements. The unique capability offered by Infinite Studio is that it can generate AI training data in the infra-red spectrum as well as the visible spectrum, and this has clearly sparked a lot of interest.