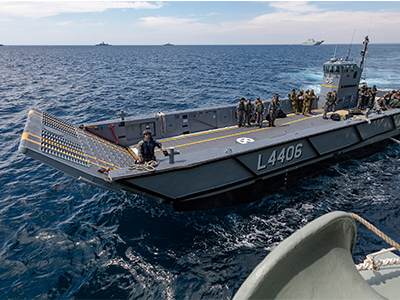 Seakeeping analysis is the knowledge of how ships behave in waves. The Royal Australian Navy (RAN) needs to know how their ships will perform at sea, because they can then define operational envelopes – the severity of conditions before a platform is no longer usable from both a personnel and equipment performance perspective.

The RAN approached DST to help assess the seakeeping of the Landing Helicopter Dock (LHD) Landing Craft (LLC). The LLC is the purpose-built sea-shore connector for the LHD Amphibious Assault Ship.  DST scientists Terry Turner and Dr Daniel Sgarioto joined an engineering task force established by the RAN’s Amphibious Combat and Sealift System Project Office (ACSSPO) to generate hard data explaining how the LLC would perform under a wide variety of sea conditions with different cargo weights. Related performance aspects were investigated by the other task force members. .

The DST analysis was an important ingredient in the task force deliverables that provide immediate and long-term improvements to the LLC vessel, enabling the loading and transport of all current and future land vehicles and thus providing a force multiplier for amphibious forces.

To undertake their study, Turner and Sgarioto joined with long-time collaborators at the Netherlands Maritime Research Institute (MARIN) to create an accurate large-scale (1:5) model of the LLC landing craft. “Experiments with scale models allow us to test scenarios without putting people in harm’s way if tested at full scale,” Sgarioto explains. “Some parts of the model were very accurate, including the bow door which was 3-D printed at scale from the as-built drawings.”

With the model in the water at MARIN, researchers created the sea conditions of interest to the Navy, applied weights in the correct locations to represent different payloads, and observed the resulting vessel motion.

“Tests like this give us a window into vessel motion, but they’re not exhaustive enough to cover all scenarios. What we did next with MARIN was develop a LLC landing craft simulation that was validated using the test data. We were then able to investigate a wider spectrum of operating conditions in a much shorter time-frame.”

According to Turner, their results, combined with that from other members of the program, give the Navy a lot more assurance about how they can operate the landing craft. Demonstrations at sea of the vessel’s operational capability will now take place.