Shedding new light in many directions 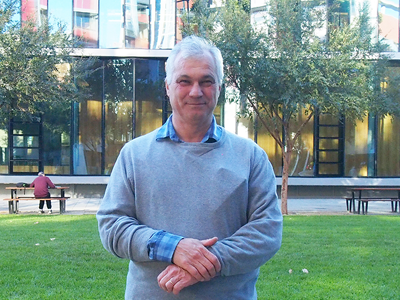 Professor Nigel Spooner is digging deep for science. In a unique initiative, DST and the University of Adelaide are jointly employing Professor Spooner to conduct dual-use research that has found applications in defence, mining, medicine, soil forensics and even archaeology.

Since 2010 Nigel has been stationed at the helm of the Prescott Environmental Luminescence Laboratory in the university's School of Physical Sciences. During this time he has demonstrated that defence science and technology can have dual applications for public good and commercial outcomes.

“I came here from Defence with the very specific intention of establishing a “standing and deployable” radiation monitoring (retrospective dosimetry) capability,” Spooner explains. “My split employment arose recently because the university was valuing dual-use work I initiated outside of that program.”

Establishing the retrospective dosimetry capability was spurred by the events of 9/11, and aimed to take advantage of the unique equipment in the laboratory of Adelaide University Professor John Prescott for measuring radiation in natural materials in the environment.

According to Spooner, establishment of the capability was relatively straightforward as the field collection of samples, lab processing and dose measurement are precisely what Defence would do in the event of a radiological event.

“But when I arrived at the university I appreciated how much more this lab could achieve. Being here on site, the chemical engineers, for example, started talking to me about the potential for new types of sensors and low-level light detection in the mining industry. That type of science is my specialty.”

So Spooner turned his sensing skills to the aid of the mining industry by participating in the ARC Australian Copper-uranium Industrial Transformation Research Hub. One challenge was to pinpoint the location of high-energy alpha particle emitters in samples, on a micron scale. This was previously considered an impossible challenge but Nigel found an answer by re-purposing a technique utilised in a 1955 PhD thesis – a classic case, he says, of ‘the old can be new again’.

Another outcome from that Hub with Defence application is novel radiation-sensitive optical fibres for distributed radiation sensing. Partners in Europe are fabricating a completely new type of silica sintered with doped nanoparticles. Spooner says it’s by far the most sensitive radiation fibre sensing material anyone has seen, and his lab is the beta tester, ready to seize opportunities that could make an impact for Defence.

Spooner and his team, at the forefront of luminescence imaging and carrying out world-leading research, are contributing to many fields. Analysis of samples from the Warratyi rock shelter, north of Adelaide, shed new light on the existence of human habitation of arid zones of Australia – habitation up to 10,000 years earlier than has been identified to date. The research also provided important direct evidence for the co-existence of humans and megafauna that had previously been lacking for the arid interior of our continent.