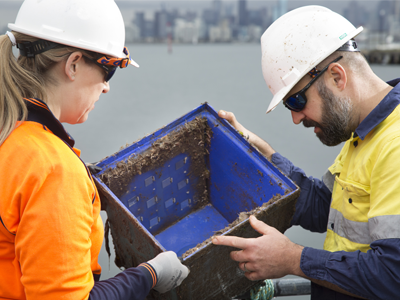 Blistering barnacles, these are some novel anti-fouling solutions.

Underwater warfare. The term conjures images of sleek submarines launching torpedoes as Destroyers drop deadly depth charges. But, there’s another intractable and entirely silent battle being waged beneath the waves. While not as potentially lethal for the ships and crews of the Royal Australian Navy, the attacks are relentless and costly – both for the Navy and for Australia’s marine environment. Defence researcher Dr Andrew Scardino is leading the fight against a determined foe.

The enemy is the myriad of marine life that attaches itself to the underside of every vessel – great and small, military and commercial. The ever-thickening crust comprises animal and plant life ranging from barnacles and oysters to algae and bacteria. Literally glued to the hull and propeller, this biomass colonises every centimetre of sub-sea real estate at an alarming rate.

The build-up is called fouling, and the rough texture increases friction and inevitably slows down the vessel, increasing its consumption of costly diesel fuel. Even relatively mild marine growth can quickly increase this fuel penalty by 10 percent, reducing the ship’s top speed and operating range, while raising emission levels and adding to maintenance costs. Left unchecked, heavy fouling can double the amount of fuel a ship would need to sustain operational speeds.

Traditional manufacturing methods rely on postproduction processes, such as the application of antifouling coatings or protective barriers, to prevent biofouling on marine equipment. While somewhat effective, these traditional antifouling methods can have limited effectiveness due to difficulties in application, short lifespans, or inappropriate use-case scenarios.

DST has developed several innovative technologies to address the shortcomings in traditional antifouling protection of marine equipment and sensors through the use of novel 3D printing filament with intrinsic antifouling properties. This enables the rapid fabrication of 3D printed parts and equipment that do not require post-manufacture antifouling protection. The components are able to withstand marine biofouling and remain operational and maintenance-free for far longer than conventional parts. Biofouling Science Discipline Lead Dr Richard Piola says after 18 months continuous deployment in the marine environment, 3D printed test coupons printed with DST’s antifouling filament have remained completely free of any significant biofouling while controls exhibited heavy biofouling growth.

Optical windows and lenses are also prone to biofouling, requiring the regular removal and replacement of critical equipment. DST is developing technology to prevent biofouling accumulation on optical sensor windows through the use of UV-LEDs. There are currently various methods such as wipers used to protect optics but they aren't very effective. Dr Piola's team is working with the Australian Institute of Marine Science in Townsville to examine the potential of using internally refracted UV light to keep the lens of optical sensors free of fouling. UV radiation is readily transmitted through a quartz lens, and field trials have demonstrated that UV LEDs can keep underwater optical sensor lenses fouling free for over 12 months under high fouling pressure, without the need for cleaning or replacement.

Defence scientists continue to develop and evaluate more traditional biocide coatings, in collaboration with coating manufacturers and academic institutions. Collaboration with industry partners has led to the development of two new coatings to combat fouling on aluminium vessels. Another exciting area of research is a radical approach to sub-sea fouling protection including for autonomous vehicles and sensors systems by incorporating a biocide into the elastomer or outer rubber skin, which is then slowly released through the skin’s surface over time to prevent fouling. Dr Scardino says field trials of that technology have proven very encouraging.

Dr Scardino's team's research into innovative ways to jettison pesky maritime hitchhikers will be featured at PACIFIC 2019, with several examples on display.