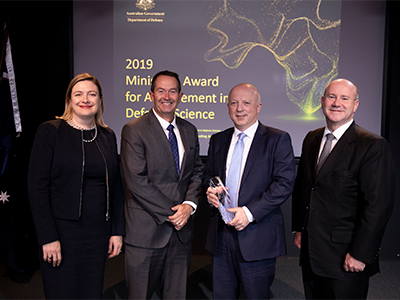 Dr Neil Gordon has been awarded the 2019 Minister’s Award for Achievement in Defence Science for his research that led to one of most important surveillance algorithms of the past 50 years.

Chief Defence Scientist, Professor Tanya Monro, congratulated Dr Gordon, saying his work in the field of international data fusion could not be overstated.

“Dr Gordon can rightfully be called the “inventor of the Particle Filter”, which is now used almost everywhere, from predicting weather, to epidemiology, to the extraction of missile threats from satellite data,” Prof Monro said.

The particle filter is a method for dealing with non-linear and non-Gaussian (variables assumed not to have a normal distribution) estimation problems.

The method uses random samples to approximate probability distributions and is able to update these probabilities using dynamic models and measurement data.

Dr Gordon also led the Defence team that contributed to the definition of the search region for the missing aircraft MH370.

This work required great technical innovation because traditional sensor data was not available for the majority of the flight.

The team developed a new approach that built on Dr Gordon’s particle filter and addressed several technical difficulties, due to the sparse and under-determined satellite communication metadata.

The method was validated against instrumented commercial flights and was published in an open access book that has had more than 60,000 downloads in less than two years.

The Minister's Award for Achievement in Defence Science is awarded annually to recognise original and outstanding contributions capable of enhancing Australia's defence effectiveness and efficiency.

“Dr Gordon is a highly deserving recipient of the award,” Professor Monro said.

The Award was presented to Dr Gordon by Andrew Wallace MP on behalf of the Minister for Defence, Senator the Hon Linda Reynolds.