The science behind smooth landings on the high seas 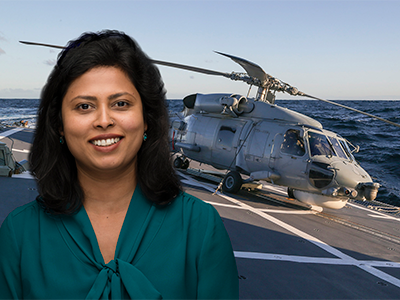 The second major technical area is computational fluid dynamics (CFD) which is employed to simulate airflows around ships and to develop databases defining the aerodynamics characteristics of helicopters. That information is then used for research into, for example, helicopter brownout effects or “out of ground effect” hovering situations.

A third area of research for the team examines augmented vision technology and its impact on helicopter pilot performance.

According to Mr Bradley Macpherson, who leads this research at DST Group, operating a helicopter on a platform at sea is a complex task that requires rigorous engineering analyses and prudent operational procedures. “The helicopter is affected by many factors including wind condition, turbulence on flight deck, ship motion, helicopter control limits, pilot workload, slung load dynamics and night operations,” Macpherson says. “Our team is developing methodologies that will reduce risk and increase the capability of ADF helicopter operations in these challenging environments.”

Most of our flight models used by the team have been developed in DST Group over several years, and there’s constant work going on to improve their fidelity. This means taking the helicopters on field trials to extract more data and then update models. “To do that we often have to gain access to aircraft that are already going on a trial and request accommodation on-board for extra instrumentation, as well as asking to share the flight data recordings,” Dr Ain says.

“For ship-helicopter simulations, we focus our analysis on the start up and shut down phase when the rotors engage and disengage at low speeds,” she says. “At those times, helicopter rotors are found to be prone to experiencing issues such as blade sailing or mast bending. It is important to know the wind speeds and what directions that cause such problems. That’s how we help Defence – we provide a simulated envelope to give our operators an idea that condition X is safe to operate, and condition Y will result in a uncontrolled movements of the blades.”

The team is also moving into the uninhabited air vehicle (UAV) launch and recovery space, as Defence begins to operate autonomous systems on naval platforms. Though the team brings expertise developed over two decades to rotary wing UAV systems, new analysis techniques are being developed for fixed wing versions. It’s a lot of work and that’s one reason why the team pitched the need for collaboration in this space during technology pitch sessions at the SCINDICATE and Pacific 2019 events.

Dr Ain enjoys the variety in the work at DST. “I can diversify into flight modelling and at the same time use my research skills in experimental fluid mechanics and CFD to simulate flows around different structures in different situations.

Dr Ain also relishes the client interaction that comes with her role, talking with operators and learning what they think about the operational side of things and then keeping that in mind while she analyses results.

“That insight gives you an idea of the practical side of operations - what they find difficult. It really helps understand their point of view.”