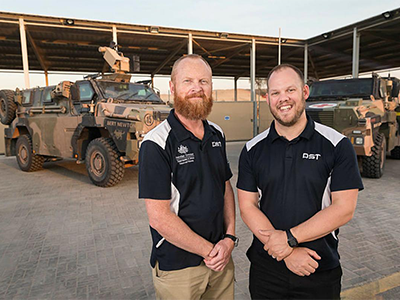 The Australian Defence Force (ADF) is backed with some of the most advanced technology in the world, but keeping it current is a challenge experts from the Defence Science and Technology are responsible for meeting.

For more than 15 years, the group has been providing frontline support to the ADF’s Middle East operations by deploying scientists, engineers and technical advisers.

Currently filling two of these roles are Matt Randell and Jeff Seers, who for the past six months have been undertaking specific research projects for the Commander of Joint Task Force 633, Rear Admiral Mark Hill.

“I can’t stress enough the importance of DST personnel in helping to improve the operational effectiveness of a wide range of essential equipment,” Rear Admiral Hill said.

“From sand storms to snow and ice, Defence equipment has to function in just about every physical environment you could imagine. This puts enormous stress on operating capabilities, and when things fail, we need to get it back up and running as soon as possible.”

Science and technology liaison officer Matt Randell, a radar systems engineer from DST Edinburgh in Adelaide, said having scientific personnel in the Middle East was essential to gain first-hand appreciation of the challenges facing ADF members.

“DST staff support the ADF wherever they are deployed, including Iraq and Afghanistan. Working in these environments is challenging, but often considered one of the highlights from our time away,” Mr Randell said.

“Defence equipment has to function in just about every physical environment you could imagine.”

The group recently undertook work on communications equipment used throughout the Middle East.

“Our research led to a number of changes to how the equipment was used and operated, which will greatly decrease the amount of time it now spends off-line,” Mr Randell said.

Mr Seers, a materials scientist specialist from DST Fishermans Bend in Victoria, works as an operations analyst at the ADF’s main operating base in the Middle East.

As a former Navy sailor who has deployed on multiple operations with HMAS Manoora, Mr Seers has an appreciation for the challenges of being away from home for extended periods.

“I had been keen to undertake this deployment for some time and it certainly lived up to my expectations,” Mr Seers said.

“It was a great combination of stimulating work, making new friends and helping the ADF operate at maximum effect.”

Rear Admiral Hill said the work by DST personnel has directly contributed to the success of ADF operations and he looks forward to their continuing support.

This article was originally published at https://news.defence.gov.au/technology/essential-answers-complex-questions