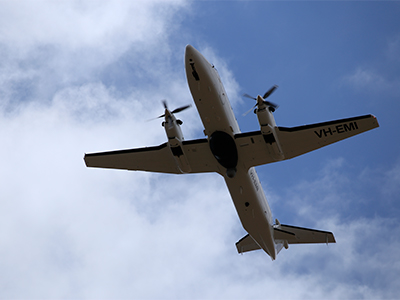 The Defence Experimentation Airborne Platform (DEAP) took off from RAAF Base Edinburgh on Monday 3 February, bound for RAAF Base East Sale.

Defence scientists are making a direct contribution to the Australian Defence Force’s response to the bushfire crisis using a research aircraft to assist in monitoring fire activity and conduct damage assessments.

Known as the Defence Experimentation Airborne Platform (DEAP), the modified Beech 1900C aircraft has been sent to RAAF Base East Sale in Victoria.

Data collected by the DEAP is being fed into the Defence intelligence, surveillance and reconnaissance (ISR) environment for processing by imagery analysts from the RAAF to ensure relevant, timely and actionable information reaches the people that need it.

Flying out of RAAF Base Edinburgh north of Adelaide on January 29, the DEAP was tasked to look for hotspots in different locations on Kangaroo Island, including around Cygnet River and Vivonne Bay.

Aboard the aircraft, five personnel from Defence Science and Technology’s (DST) Intelligence, Surveillance and Space Division (ISSD) operated the sensors and mission systems.

Industry partner Hawker Pacific, which maintains and flies the DST-owned asset, provided the two pilots and an aircraft engineer for the operation.

“Crucially, the DEAP provides a near real-time surveillance capability while operating at a distance from any fire activity at relatively high altitudes, meaning it would not get in the way of any water-bombing activities closer to the ground,” he said.

Ahead of its first operational tasking, the aircraft had been flown from its base at Bankstown Airport in Sydney to RAAF Base Edinburgh to enable DST’s mission equipment to be installed and tested.

The airborne surveillance platform’s sensor payload has been configured to include the MX-20HD electro-optic/infrared full-motion video system and a wide-area motion imagery (WAMI) system known as Angel Fire.

It is the first time a WAMI system has been used to support firefighting efforts in Australia. But with an eye to future bushfire seasons, as well as other emergency response scenarios such as cyclones and floods, Defence scientists have been investigating potential enhancements to this capability.

The possible integration of a short-wave infrared sensor, for instance, would enhance the DEAP’s ability to conduct surveillance through smoke, offering an even clearer picture of what is happening on the ground.

The DEAP is used for a wide range of airborne ISR experimentation and sensor trials activities. This includes informing future upgrade options for the P-8A Poseidon maritime ISR and response aircraft, which has also contributed to Operation Bushfire Assist by conducting reconnaissance flights over fire-affected areas.