Protecting our soldiers across the spectrum

Defence scientists are building up a database of hyperspectral imaging data to support the development of next-generation camouflage that will help Australian soldiers avoid detection on the battlefields of the future.

Everyone is familiar with the basic concept of camouflage. Whether moving through a forest or operating in the desert, soldiers wear uniforms that are specifically designed to enable them to blend in with their surroundings.

But on the modern battlefield, avoiding detection requires much more than tricking the human eye. Recent advances in hyperspectral imaging technology mean our troops face a far more formidable foe.

While humans can perceive only a very narrow portion of the electromagnetic spectrum, hyperspectral sensors measure reflected and emissive energy at wavelengths far beyond the visible, and therefore collect information from right across the spectrum.

This advanced surveillance technology can be used to detect concealed objects and identify different materials by recognising their unique spectral signature or ‘fingerprint’.

Developing effective counter-surveillance camouflage requires an understanding not only of the materials being used to disguise soldiers, but also of the characteristics of the operating environment and the new types of sensors that might be used to hunt for them.

With so many different sensor systems being deployed on a wide range of platforms - including small uninhabited aircraft, or drones - potentially posing a threat to military personnel and their equipment, conducting exhaustive testing using human observers is not practical.

That is why researchers from Defence Science and Technology (DST) are establishing 3D, dynamic and spectrally accurate virtual environments where they can carry out electromagnetic signature assessments. Using these virtual environments is a quicker and easier way for them to test the effectiveness of camouflage under any representative environmental conditions.

Unlike a typical 2D camera image, a hyperspectral image presents a scene in the form of a 3D ‘data cube’ that combines spatial and spectral information. 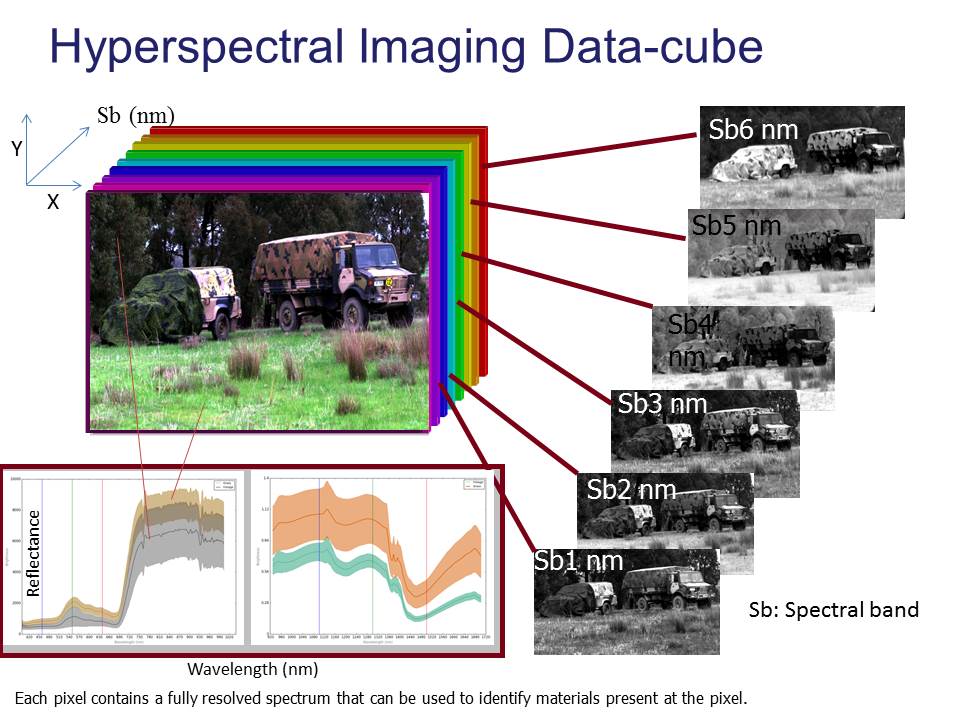 Dr Bin Lee and his colleagues within DST’s Land Division are working to develop the framework for a database containing real-world or ‘ground truth’ hyperspectral imaging data.

The database would act as a reference library for spectral signature measurement, assessment, modelling and simulation activities, and would support the design of adaptive camouflage or decoy options for responding to threats in different background environments.

This work is being carried out under the Land Signature Modelling and Simulation Capability program, otherwise known as Lelantos (a god in Greek mythology whose name means ‘something that goes unobserved’).

“As we think about how best to equip the soldier of the future, we are working on two fronts: camouflage and detection,” says Dr Lee.

“The next generation of equipment will include detection technology and sensors that would be worn by soldiers to enable them to identify threats, as well as countermeasures to protect them from being detected themselves. And our unique database will underpin research in both areas.”

DST has already collaborated with camouflage experts from Defence Research and Development Canada and NATO, conducting field trials in a range of different representative operational background environments, both around Australia and overseas.

Recent field trials have been undertaken at the Puckapunyal Training Area in Victoria, where the scientists collected hyperspectral imagery of land targets and terrain backgrounds in different seasons and weather conditions.

Further trials are planned that will enable Defence researchers to add more high-resolution reference data to their database. Ultimately, this important work will inform the design of enhanced camouflage that will help to protect soldiers and give them a capability edge.