Turning up the heat! Putting protective equipment to the test 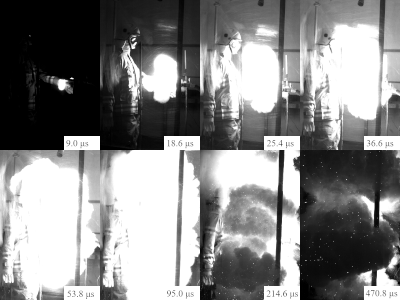 Imagine a high-powered, long-burning firecracker igniting in your face.

That’s the risk faced by ground support personnel when called to attend to an aircraft with an unspent flare, also known as a ‘hung flare event’.

Flares are used by military aircraft as a defensive countermeasure against heat-seeking missiles. They are basically high-intensity pyrotechnics which burn at temperatures of up to 1600oC, and when released from aircraft can draw a missile away from its target.

Very occasionally, flares can become stuck in their release tubes and are not successfully released.

In this extremely hazardous situation, aircraft are forced to land with the unspent flare still in their tubes, and it is up to specially trained download crew to deal with them.

‘Some electronic warfare self-protection flares are ignited by a strike mechanism that comes into contact with a friction-sensitive ignition composition. For example, the flare grain composition of magnesium, Teflon, and Viton.’

‘Should the flare not successfully eject from the aircraft during flight, any movement of the flare within the dispenser during download poses a risk of flare ignition.’

To mitigate this risk, download crew must secure the partially ejected flare to the dispenser with adhesive tape.  This task poses a significant risk to the personnel involved. For their protection, download crew wear a complete fire fighting ensemble, including a helmet, face shield, boots and gloves.

To ensure the ongoing safety of download crew, DST has evaluated the performance of a new fire fighting ensemble and a range of helmets in a simulated hung flare event.

Dr Jie Ding was scientist-in-charge of the trial.

‘Manufacturers can guarantee the performance of their products under certain conditions,’ Dr Ding explains, ‘but Defence often pushes products to the extreme.’

‘It’s critical that we undertake rigorous testing of personal protective equipment to ensure that Defence personnel are properly protected,’ she says.

The trial was conducted in DST’s burn chamber in South Australia using an instrumented mannequin dressed in the full fire fighting ensemble.  Designed and developed by DST, the mannequin imitates the human skin surface, and is used to measure surface temperature, heat flux levels and duration.

The set-up for the trial was the same as that used for previous assessments conducted at the burn chamber to allow for accurate comparison.

‘The pose and distance between the flare and the mannequin was based on the typical position of someone attending a hung flare event,’ Dr Ding explains.

Three complete sets of the current and future firefighting ensembles were tested. A baseline test was also conducted with the mannequin dressed only in undergarments.

Using the data recorded on the mannequin, the extent of predicted skin burn injury could be calculated and the performance of the protective equipment assessed.

The performance of both the current and future firefighting ensembles was similar, with each generally providing good protection, however the trial identified some areas for improvement.

‘We found that the eyes and respiratory system were vulnerable to the flashing light and burning chemical residue from the flare, and we have suggested an alternative head-mounted protective system for future testing,’ Dr Ding says.

The results of the trial have provided important scientific evidence to support updating the personal protective equipment, and will be used to enhance the protection of Defence personnel handling hung flare events.