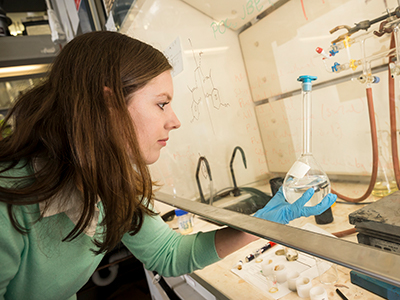 Dr Renée Webster’s analytical chemistry research is contributing to the safe and effective use of fuels by Defence.

Defence scientist Dr Renée Webster has been awarded a prize for excellence by the National Measurement Institute (NMI) in recognition of her significant contribution to analytical chemistry.

The NMI Prize is an annual award celebrating outstanding achievement by a scientist under the age of 35 that is awarded by the Australian Government’s national authority on measurement.

Highlights of Dr Webster’s work with Defence Science and Technology (DST) over the last decade or so include her assessment of the properties of fuels at high temperatures, which supports the operation of Royal Australian Air Force aircraft such as the F-35A Lightning II.

“This work is particularly important for high-performance military aircraft, and contributes to the safe and effective operations of the Australian Defence Force,” noted Dr Bruce Warrington, NMI Chief Executive Officer and Chief Metrologist.

Another important area of Dr Webster’s fuels research, carried out during her time with DST’s Aerospace Division, is her characterisation of a range of alternate fuels that might be used to power the aircraft and ships of the future.

Dr Webster is currently applying her analytical expertise to the challenge of countering chemical threats, working within DST’s Land Division.

Similar techniques to those used to study fuels enable scientists to examine samples taken from environments where chemical warfare agents are thought to be present, she explains. Chemical ‘fingerprints’ found in these samples can reveal how or where a substance was produced, which might shed light on the identity of the perpetrator of an attack.

Dr Webster says she is proud to have been chosen as the recipient of this prestigious national prize, which is an acknowledgement that her work over the years has been of the very highest standard.

“It’s also nice to have this opportunity to step back and allow me to take stock of my achievements,” she says. “But it’s not just my work, even though this is an individual prize.

Dr Webster was announced as the winner of the NMI Prize on May 20, which is World Metrology Day. Metrology is the science of measurement.