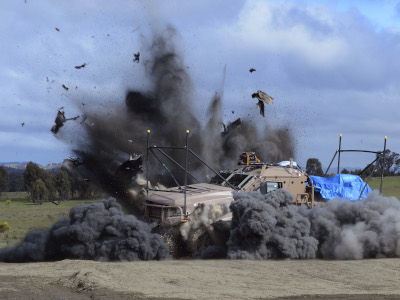 Defence subjected the Hawkei to live-fire underbelly blast testing during trials in 2011.

Studying trauma data from civilian hospital patients is helping Defence scientists improve their understanding of how extreme forces affect the human body, supporting their efforts to protect soldiers on the battlefield.

Reducing the risk posed by roadside bombs is an area of significant effort by Defence Science and Technology (DST) researchers. But collecting data on the battlefield is extremely challenging.

Scientists therefore need to come up with alternative means of gathering information that will help them design even better military vehicles for our troops, including looking for comparable scenarios in the civilian world.

“A fall from a height where the patient lands on the base of their pelvis generates vertical-loading conditions similar to those exerted on a soldier subjected to an underbelly blast from under their seat,” explains Dr Franklyn.

“As the loading conditions are similar, and the types of injuries sustained are the same, we can use more readily available data from this civilian scenario to gain important insights into what occurs in the military context.”

A soldier travelling in an armoured vehicle that is struck from underneath by an underbelly blast is at risk of sustaining severe injuries to the pelvis and lower back that could be life-changing, or even fatal.

Gaining a better understanding of the relationship between impact conditions and the tolerance of the pelvis and spine to fracture would support efforts to optimise safety measures in military vehicles.

In some studies, researchers have tackled this problem by conducting experiments using cadavers. But these test subjects tend to be much older than the typical Australian soldier.

An advantage of cadaveric experiments is that they provide data in a controlled laboratory environment. However, subjects of advanced age on average have an injury tolerance that is considerably lower than that observed among young, living subjects.

Data therefore needs to be gathered from other sources in order to obtain tolerance values that are of greater relevance to younger individuals. 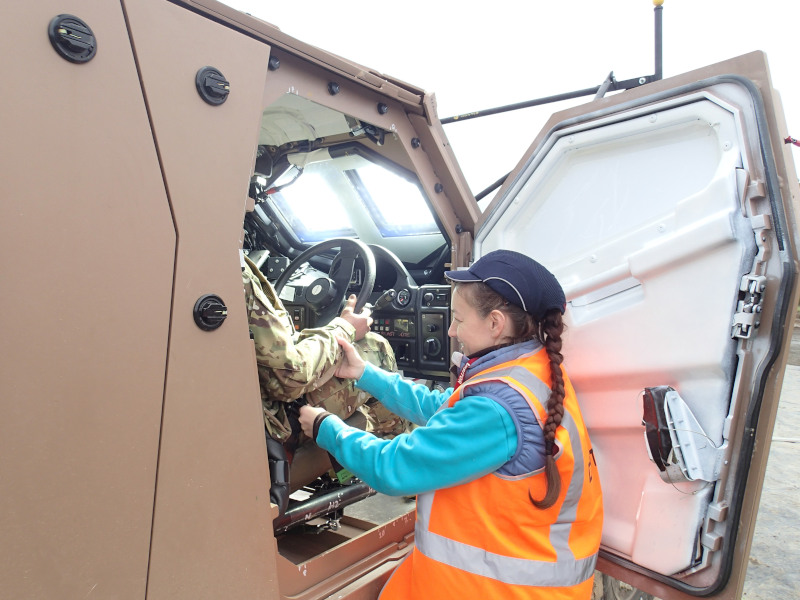 Dr Melanie Franklyn making final adjustments to an anthropomorphic test device seated inside a Hawkei vehicle in preparation for a blast test.

Dr Franklyn worked with experts at the Royal North Shore Hospital in Sydney to review medical records, analysing data from patients who had been admitted having sustained severe pelvic or lumbar spine (lower back) fractures as a result of serious fall events.

“Before we started our work, the research proposal had to go through a rigorous ethical review process,” she says.

“Protecting patients’ information was at the heart of everything we did. For example, we used de-identified data in our analysis, and the number of people who saw the full dataset was kept to an absolute minimum.”

The research team conducted site inspections to determine how injuries were sustained, including precisely measuring fall heights in order to calculate impact velocities.

Using this approach, the researchers were able to include a relatively large number of living subjects in their study, representing a wider range of ages. This is crucial, because age was found to be the most important factor determining the severity of the injuries sustained.

Analysis of the data revealed that tolerance to serious pelvic and spinal fractures was significantly higher, on average, in the younger individuals than in older individuals (12.5 m/s for the young patients compared to 7 m/s for older cadavers).

This suggests that military vehicle seat designs might be overemphasising the need to protect soldiers from injuries to the pelvis and lower back.

“While a greater level of protection might at first seem desirable, this could have unintended consequences,” says Dr Franklyn.

“For instance, seats designed to reduce the likelihood of less serious pelvic or spinal injuries generally require more vertical space, bringing soldiers’ heads closer to the roof of their vehicle and potentially increasing the risk of head and neck injuries.”

Safety measures must reflect a balanced approach to risk, providing the greatest overall level of protection for a vehicle’s occupants in a confined space environment. This research therefore has implications for how equipment is designed and tested. 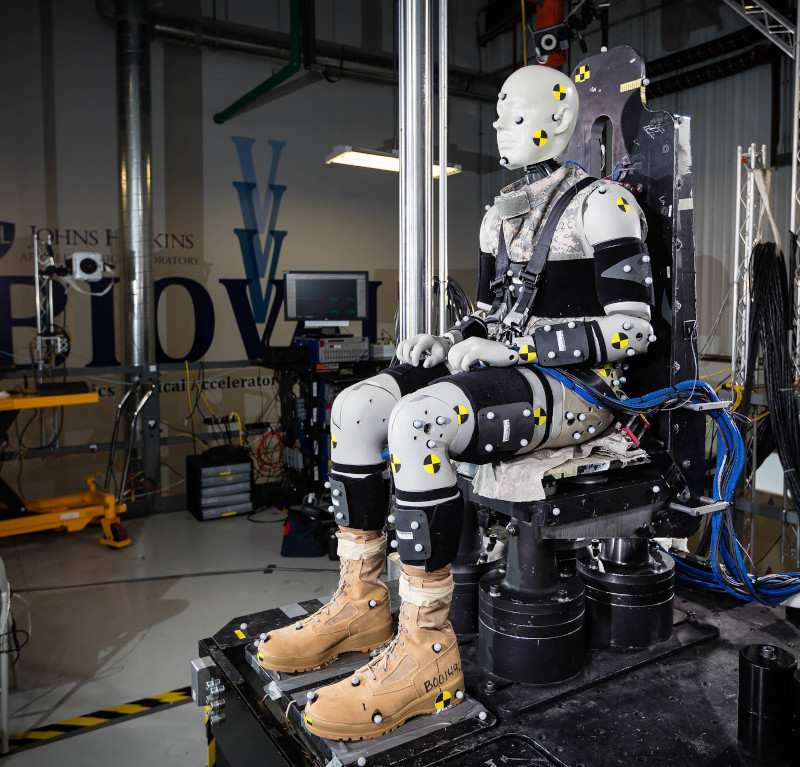 Researchers assess the likelihood of personnel sustaining injuries by conducting live-fire blast testing; that is to say, they put armoured vehicles to the ultimate test by blowing them up.

By putting anthropomorphic test devices - commonly known as crash test dummies - inside these vehicles they can gauge the effects of extreme forces on humans under controlled conditions.

The instrumented devices are used to measure loading levels on different parts of the body to work out whether predetermined injury thresholds have been exceeded. The data used to set these thresholds needs to be as representative of real-world conditions as possible.

DST’s evaluation threshold criteria, which were developed by Dr Franklyn in 2011, have been used to support a number of blast tests, such as assessments of the Hawkei protected vehicle and Boxer combat reconnaissance vehicle.

These criteria are informed by data from a range of sources, including automotive crashes and aircraft pilot ejections, but rely heavily on cadaveric testing due to a lack of other available data.

“The aim of my research was to determine tolerance to pelvic and lumbar spine fractures in young, living individuals, and use this data to develop more accurate injury thresholds,” says Dr Franklyn. “Supplementing cadaveric test data with data from living patients yields more realistic injury tolerances.

“This means more accurate injury assessment during blast testing, therefore leading to improvements in the design of injury-mitigating structures in vehicles, such as energy-absorbing seats.”

The live-fire testing program that formed part of the LAND 121 Phase 4 selection process, which saw the Hawkei prevail, is a great example of highly effective collaboration between multiple teams from across Defence, she notes.

Dr Franklyn’s research has not only directly contributed to the enhancement of test programs for Australian Army vehicles but has also informed the development of a US Army blast dummy called WIAMan (Warrior Injury Assessment Manikin).

The findings of this hospital data study are expected to support the refinement of pelvis and spine injury tolerance curves for use by vehicle test experts in both Australia and the US.

Dr Franklyn has also studied how sitting posture influences the risk of sustaining a pelvic injury in the event of an underbelly blast, as outlined in a recently published paper.