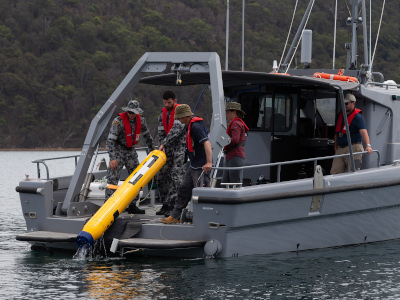 Hunting for mines at sea is a dangerous and tiring job for humans, but it's all in a day's work for robotic vehicles equipped with sonar and advanced software that can automatically detect potential threats.

Whether providing a persistent bird’s eye view of the battlefield or searching the ocean for mines, it is well known that robotic systems are ideally suited to dull, dirty and dangerous jobs.

The operator of an uninhabited aerial vehicle flying high in the air can remotely control what is often referred to as a ‘drone’ using radio or satellite communications. But communicating through water is much more difficult, driving a need to incorporate a greater degree of autonomy in uninhabited underwater vehicles, or UUVs.

Defence is experimenting with deploying UUVs to undertake mine countermeasures operations. Hunting for naval mines is obviously dangerous work, and the task of interpreting vast amounts of sonar imagery is monotonous and tiring for humans.

There are a range of technological solutions that can be used to seek out mines in the ocean, but the Royal Australian Navy primarily relies on sonar.

As it moves through the water, a sonar device sends out pulses of sound and listens for the echoes to bounce back. From this data, sonar produces acoustically generated images that should reveal any mines that might be lurking on the seabed. 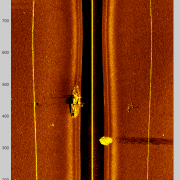 A sonar image captured by a UUV showing a wrecked boat and schools of fish.

Known as SonarDetect, the software can be used to carry out post-mission analysis; that is, processing data all at once after it has been collected. But the software can also work in real-time while a sonar-equipped UUV moves around the ocean.

“These robotic vehicles are normally programed to follow certain fixed paths,” Dr Chapple explains. “They will cover an area of the seabed and go backwards and forwards – we call that mowing the lawn – to cover an area and provide images of all of the seabed.

“Traditionally, those images are sent back for analysis later by the naval operator. But we are trying to make that more autonomous so that the vehicles can respond immediately if they see something of interest.

“To do that, you have to get a good detection rate and a very low false alarm rate, and that’s the challenge. If they respond to every rock on the seabed, or every fish, you’ll never get anywhere.”

So what happens when the UUV detects something suspicious? The robotic vehicle might pause its predetermined search pattern to take a closer look at the object, capturing images from different angles to help identification.

The UUV might return to the surface and send a signal back to the human operator to alert them to what it has found, and to await instructions on what to do next. It might call in another type of specialised robotic vehicle to deal with the threat.

“The software is replicating what a human would do, but a trained operator could generally do better,” Dr Chapple says. “Humans have an ability to recognise certain objects and they know what is likely to be in certain places, so there’s a whole lot of contextual understanding that a human has which is very difficult to program.”

That said, human operators are prone to getting tired, and could be distracted by having to undertake other tasks.

“They start off being quite good at processing data, but after a while they get fatigued and they miss things, whereas the software will just keep going,” Dr Chapple continues.

“The software alerts the human to look at certain objects and make a decision, so it’s still a teaming between what the machine can do and what the human can do.”

How to train your algorithm

Defence scientists are increasingly looking to use machine learning techniques to train their algorithms. This works best when you have access to a huge number of examples of the object you are training them to recognise.

When it comes to naval mines, real-world data is hard to come by. The solution could be synthetically generated training data, which is the subject of an ongoing research effort within Defence.

As useful as robotic vehicles undoubtedly are, they are not intended to replace naval personnel. Dr Chapple envisages UUVs being deployed as part of a team to enhance Navy’s mine countermeasures capability.

“We’re trying to build in autonomy, because at the end of the day it will enhance the ability of the naval operator to conduct a mission,” he says. “If they can send out robotic vehicles, trust what they’re going to do and rely on them to come back safely then that will be a force multiplier going forward.”

Defence is a proud participant of National Science Week, celebrating and acknowledging the contribution that our STEM workforce makes to the capabilities of our Defence Force and the security of the country. Check out #STEMsavinglives.