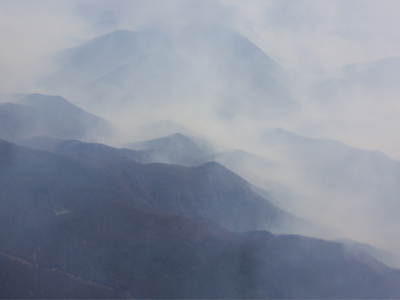 Firefighting efforts rely on detailed and accurate information on the location of fire fronts and spot fires. This situational awareness is best gained from above using an aircraft or even a satellite.

While the human eye can provide valuable information, it pales in comparison to the information that can be collected by electro-optical sensors.

Electro-optical sensors are electronic detectors that can detect electromagnetic radiation from infrared to ultraviolet wavelengths, picking up significantly more than what can be seen with the naked eye. Installed on an aircraft or satellite, these sensors provide invaluable data and information to firefighting authorities.

The images on the right demonstrate the difference between a ‘visible’ image and an ‘infrared’ image. Both images were taken from a satellite at the same time showing exactly the same area of land. The image on the left-hand side is a visible image and shows only smoke drifting across the landscape. The image on the right-hand side is an infrared image. It clearly shows the fire fronts, with the relative intensity of the blaze indicated in reds, yellows, oranges and greens. This detailed information helps authorities to target their firefighting efforts most effectively and enables them to provide clear and accurate information to the public about the extent of the fire and the damage it has caused.

Bird’s eye view of the blaze

Known as the Defence Experimentation Airborne Platform (DEAP), the modified Beech 1900C aircraft is typically used for exploring intelligence, surveillance and reconnaissance technologies, but the powerful sensors on board made it the perfect tool for monitoring bushfires.

Its manoeuvrability and the fact that it can be used as a dedicated fire surveillance platform to linger over fires means that the aircraft has a distinct advantage over the use of a satellite, which follows a set orbit and cannot be easily manoeuvred.

Crucially, the DEAP operates at relatively high altitudes, meaning it does not get in the way of any water-bombing activities closer to the ground.

Eyes in the sky

Left to right: The AngelFire and the MX-20

For operation BUSHFIRE ASSIST, the aircraft was fitted with an MX-20 full-motion video sensor and an AngelFire Wide Area Motion Imagery (WAMI) sensor.

The video below shows a full frame from the AngelFire sensor, covering an area of approximately 6 by 5 kilometres and providing a clear picture of the fire damage.

The MX-20 mid-wave infrared sensor was able to see through smoke and haze to observe fire activity, even picking up embers.

To further aid firefighters, Defence scientists developed a situational awareness display (pictured in the video below, lower right) which mapped the fire front. The MX-20 operator would effectively trace the fire front with the boresight of the sensor. The system automatically logged and plotted the track of the boresight. This trace information was then interpreted by a mapping tool and provided to relevant authorities, providing firefighters with potentially life-saving information.

Defence is a proud participant in National Science Week, celebrating and acknowledging the contribution that our STEM workforce makes to the capabilities of our Defence Force and the security of the country. Check out #STEMsavinglives.