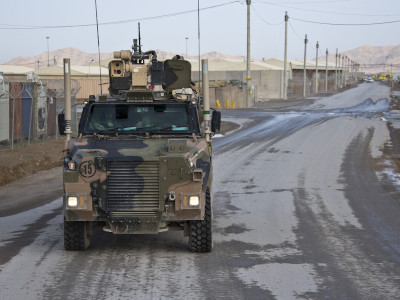 Ever wondered what happens if you blow up a fluid-filled container? Creative thinkers from Defence have shown that water can help protect armoured vehicles from bomb blasts.

When you are tasked with working out how to improve blast protection for armoured vehicles, it helps if you can think outside the box – or should that be inside the box?

Armoured vehicle designs must find a balance among requirements for protection, mobility and firepower. For instance, you could add more and more armour to your vehicle to increase protection. But adding extra weight reduces mobility, eventually to such an extent that you have made the vehicle less safe.

What if you could enhance protection without increasing the weight of the armoured vehicle by rearranging the cargo that is already inside it? Enter the humble jerrycan.

“Australian soldiers out on patrol in their armoured vehicle may be carrying hundreds of litres of water with them,” says Defence scientist Dr Huon Bornstein.

“So we came up with a plan to test whether water containers could be repurposed to help mitigate the effects of an explosion, in the event that a vehicle encounters a roadside bomb.”

Defence scientists have demonstrated that when water containers are positioned in the right places inside an armoured vehicle they redirect some of the energy generated by a blast, helping to protect the vehicle’s occupants. 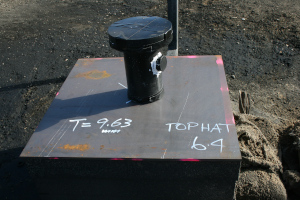 How does it work? Dr Bornstein explains that a number of physical mechanisms are at play that together reduce the effects of an explosion. Firstly, the mass of the water increases the total amount of armour protecting the vehicle.

Thirdly, the blast wave generated by an explosion causes the water in the containers to spread out in all directions. This effect distributes energy over a wider area, helping to reduce damage.

“We started with a jerrycan that we bought from a hardware store; that was our first test,” Dr Bornstein says. “But then we moved on to some more elaborate container shapes that were designed to make the most of the physics.”

This research focused on optimising the shape of the container to achieve the best protection for a given mass of water. The scientists dubbed the most effective container shape the ‘mushroom’ or ‘top hat’.

Having proved the concept in tests, Defence is now considering how to go about equipping armoured vehicles with this innovative protection solution.

Defence is a proud participant in National Science Week, celebrating and acknowledging the contribution that our STEM workforce makes to the capabilities of our Defence Force and the security of the country. Check out #STEMsavinglives