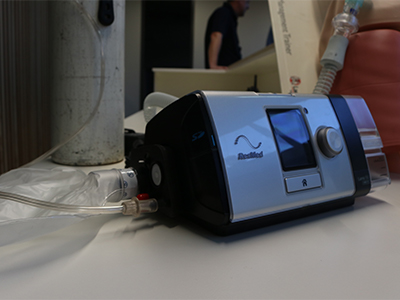 Invasive ventilators are playing a crucial role in the care of seriously ill COVID-19 patients. These sought-after medical devices are in short supply around the world, but a novel Defence engineering solution has expanded Australia’s potential stockpile. Engineers from Defence’s Defence Science and Technology Group (DST) have developed an inexpensive device that converts common sleep apnoea devices into invasive ventilators.

The safe, controlled delivery of high levels of oxygen to the patient loomed as the most complex engineering challenge for Teske’s team. One option considered was to insert oxygen downstream into the breathing circuit via venturi or direct injection; however, this limited the oxygen levels that could be supplied to the patient. The other option was to inject oxygen directly into the inlet of the non-invasive ventilator. This option gave the team several safety concerns to ponder including a greater risk of fire and explosion, and potential injury to patients.

“The team utilised a fail-fast approach to rapidly iterate and arrive upon the final solution,” says Teske. “Within two weeks we had designed, developed and discarded five prototypes, making improvements with each version. By the sixth prototype we had a strong understanding of the strengths and weaknesses of various approaches and were able to develop an elegant solution.”

The solution is an oxygen insertion valve that can be installed on Australia’s most popular sleep apnoea machines. The oxygen insertion valve enables the desired fraction of inspired oxygen to be injected upstream, and incorporates a safety feature that regulates oxygen pressure to within the machine’s design range. A secondary pathway avoids pressure build-up that would damage a patient’s lungs, and a further safety feature prevents patient asphyxiation if the oxygen supply is inadvertently turned off or cannot keep up with demand.

Importantly, the oxygen insertion valve results in very efficient use of oxygen which is a resource in high-demand in many hospitals. Several flexible modes of operation are possible depending on the resources available, meaning the solution can be implemented in rural and remote areas.

Operation of electrical equipment in an oxygen-enriched environment can result in greater risks of fire and explosion, so the team called on other defence scientists to help verify the safety of the new conversion kit. Teske was able to leverage knowledge and equipment normally used for high explosive and warhead characterisation to assist with undertaking the safety assessment of the converted ventilators.

A production data pack for the conversion kit has been created, including safe operating procedures, and discussions have taken place with major sleep apnoea device manufacturers in order to transition the intellectual property. Australia is now in a strong position to rapidly increase our ventilator stocks in an emergency situation.

This is an example highlighting the versatility of DST scientists and engineers in solving problems of national interest.