Swarm of students energised and ready to fly 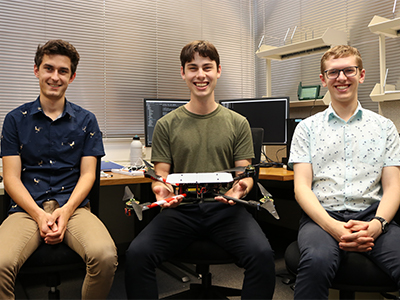 Each year in December dozens of undergraduate STEM students head to DST Group sites for paid summer vacation placements. The students carry out STEM research that is both interesting, relevant to their courses and future careers and makes a valuable contribution to DST Group’s research programs. Here’s one example.

Defence scientists at DST are exploring how intelligent swarms of low-cost weapons could be used to penetrate sophisticated anti-access, area denial (A2AD) defensive systems. DST is working with an industry partner to transition algorithms into Australian made technology and the near term goal is to demonstrate the prototypes in indoor and field trials.

“What we want to do is use large numbers of cheaper micro-aerial vehicles (MAVs) to see if we can penetrate enemy defences, overwhelm defences and approach the enemy in more sophisticated ways,” says defence scientist Mr Craig Eales. “A large number of MAVs makes the group more survivable and the combined effects can be greater than the sum of the parts.”

The best way to control these swarming MAVs needs to be investigated. So Eales and colleagues devised projects that allowed three summer vacation students to work as a team to investigate three core aspects of swarming algorithms.

“I supervised QUT electrical engineering student Jack Taylor in a swarm behaviour control project,” says Eales. “The idea was to establish a simulation framework and insert some initial flocking algorithms. We wanted to investigate if this approach will allow us to produce a guidance controller that could be driven by fuzzy logic but with rules that could be understood by humans. As a result of Jack’s contribution we’re now able to add different, more sophisticated swarm behaviours and also incorporate machine learning and genetic algorithms that allow the flock to be trained.”

A virtual gym for drones

Jack’s virtual gym was created using open-source software and can now be used with simulated micro-aerial vehicles to improve drone and swarm algorithms. “Once it’s set up, we can let the robots loose in there. They’ll perform badly, try again and again and by the end you have smart robots,” says Jack. “The intention is then to take that code, insert it into our quadcopter and launch it in our indoor flight arena to see how it works in the real world. We could probably have ten MAVs flying simultaneously in the arena, avoiding obstacles.”

Jack appreciated the ‘choose your own way’ approach to his summer vacation placement at DST. “I was told ’This is the goal – find a way to achieve it.’ I’m grateful for the opportunity to learn so much, and how willing people at DST have been to help me learn.” Jack and three other QUT students continued to develop the swarm training environment with Craig as their final year project.

University of Adelaide electrical engineering student Luke Smith developed a set of MAV control rules that could assist the MAV to intelligently navigate around obstacles to reach a target.

“With this project, I came up against an entirely new set of things to get my head around,” says Luke. “It’s been fun and the camaraderie has been great. With a stretch goal of flying five MAVs in the IFA, it’s been an exciting project to be working on.”

Adelaide University mechatronics engineer Rhett Hull was the third team member. His component of the project used reinforcement learning techniques in a predator-prey scenario, where the incoming predator is superior to a bunch of smaller prey. “You could use an arbitrarily large number of starlings to subdue a predator eagle,” he explains. “But what we want to work out is the smallest number possible in order to effectively stop the incoming predator.”

For Rhett, the most enjoyable aspect was the challenging nature of the work. “University work is a closed environment. There’s one pretty narrow pathway to get to a solution. Here I’ve been experimenting with a hundred different ways to do one thing and now coming to a point of having to make a choice on how I’ll solve the problem. I’m discovering that there are no clear pathways in the real world, it’s up to me to choose a path based on what I think is going to work best in the testing phase. I like the pressure.”

While the algorithms are first tested with virtual drones in a simulation, Dr Rajagopalan says there is a pathway to eventually testing out the algorithms with MAVs in the indoor flight arena. “Supervising these undergraduates was a good experience,” he says. “I did feel a responsibility to make sure both DST and the students got value from the experience, so I started thinking earlier about how the MAVs project would decompose into different smaller projects. The fact that some students continued to work on the project as an honours project was a great outcome, allowing the project to live on over the entire year.”

The DST summer vacation STEM experience has helped to launch Rhett, Jack and Luke on their engineering careers. At the same time, valuable defence S&T knowledge was generated. Rhett and Luke were both subsequently offered DST STEM cadetships. During semester breaks they return to DST to conduct further research. Jack has accepted a graduate engineering position with BAE Systems.