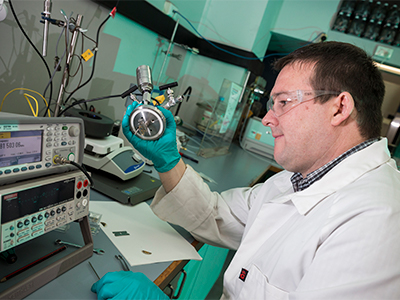 Defence Civilian Dr David Evans, Senior Chemistry Scientist from the Engines and Fuels Integrity department, prepares to calibrate a machine prior to testing in the Fuel and Lubricants Laboratory at the Defence Science and Technology Group facility, Fishermans Bend, Melbourne.

Defence scientists David Evans and Paul Rawson specialise in the chemistry of aviation and diesel fuels, respectively. They both received awards from peer bodies in recent times, acknowledging the important, enduring and on-going contributions they and their team are making to fuel research for Defence.

Despite sometimes getting the tag of a being ‘just a testing lab’, Evans and Rawson lead solid and relevant research programs on behalf of the Defence fuels community. The long-term focus has been on maintaining the quality of Defence fuels, and specifically fuel degradation and what that means for Defence operations. A major focus at the moment is improving how Defence integrates fuel testing into its operations, and a priority over the last 18 months for Evans has been the design and assembling of deployable fuel quality control equipment.

Evans is DSTG’s Army and Navy Science Team Leader (STL) for fuels and lubricants. He says it’s been a very busy couple of years with many opportunities in the fuels research area banging on the door. An injection of new lab equipment in recent times will drive DSTG fuels research that will bear fruit for Defence, the Five Eyes community and industry.

Evans was pleasantly surprised to receive a Lifetime Achievement Award at the most recent meeting of the International Association for Stability, Handling and Use of Liquid Fuels (IASH). IASH brings together all the industry experts in the aviation and diesel fuel areas that deal primarily with the stability of the fuels and how to handle them – it’s where you make your name in the field.

“Developing strong relationships in your international research community is invaluable,” says Evans. “You look at some of the things we’ve done over the years, the programs we’ve led such as the work that modified the world’s commercial jet fuel standard. You get impact there, as a result of those links.”

He says it’s been essential for the team to keep innovating, because traditional test methods weren’t achieving results with contemporary fuel products. “That’s something we’ve been challenged by for a fair while and all our research had been aimed at resolving that.”

AIRCDRE Mark Green (Director General Air Capability Enablers / AFIC National Director) presented the award at the 2019 Defence Fuel Services Branch Symposium. At the time he noted that Rawson’s dedication has considerably enhanced fuel interoperability among the Five Eyes nations and, in many cases, has had wider ramifications.

Rawson and Evans had a Eureka moment when the realised they had clearly identified for the first time the chemistry of tertiary oxidation that degrades fuel. This led to a long-term partnership with Monash University starting with a research project to characterise the fuel oxidation products. The discovery helped solidify their standing in the fuels community and opened up many doors, according to Evans. Key chemical markers in fuel were identified that are intimately linked to unsuitable fuel or give an indication of how much life is left.

Imagine a test that identifies how long a fish and chip shop’s oil can continue to be used. That’s what this duo gave to the aviation world.

In a moment of reflection, Rawson says DST’s fuels team is a great team and has made work a fun ride. “Our work is internationally recognised; it’s nice to feel we have achieved some good results for Defence, and the wider international fuels community has been very supportive of us.”