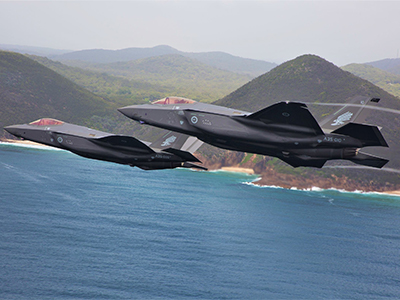 What do fighter aircraft, alligators and hurricanes have in common?

If you are a DSTG engineer posted to Eglin Air Force Base in the Gulf Coast of Florida: Plenty! But more about those alligators and hurricanes a little later!

In the last three years while posted to the US Air Force SEEK EAGLE Office (AFSEO) at Eglin Air Force Base in Florida, DSTG engineer Regina Blyth has led the development of a computational aerodynamics modelling capability for the external and internal carriage and release of weapons from the F-35A fighter jet. Blyth has worked with DSTG colleagues and US counterparts to take this capability from zero to fully validated and operational within that timeframe. This outstanding contribution has resulted in significant impact on Defence outcomes - supporting the missions of both the Royal Australian Air Force and the United States Air Force by providing valuable aircraft-weapons integration tools for certification of current and future weapons carried and deployed from this fifth-generation fighter jet.

“Especially within the context of limited availability of flight test aircraft, and with experimental data from Australian and US wind-tunnel facilities as yet unavailable, computational aerodynamics modelling tools have bridged the capability gap and resulted in a highly-valued Defence outcome,” says Blyth. The tools allow a greater range of weapons can be integrated onto Australia’s F-35A combat aircraft. This has provided the Australian Defence Force with greater options to more effectively deter and respond to threats against Australia and its interests.

As the first DSTG engineer embedded in the Computational Aeromechanics Team at AFSEO, Blyth has taken the initiative to identify and facilitate opportunities for data and tool exchange, reaping benefits for DSTG and the ADF; a high benchmark has been set for those following in her tracks to continue fostering this important partnership. As she prepares to return home, Blyth says she’ll miss the air show of fighter jets flying overhead every day at Eglin and the beautiful beaches of the Emerald Coast. “There’s no doubt this posting has been a career highlight,” she adds.

This work is contributing to an effective air combat capability for both Australian and US air forces, while also minimising risk to aircrew and aircraft, and reducing the need for expensive physical testing. Development of accurate, fit-for-purpose computational aerodynamics models will result in reduced time and cost of weapons clearance certification and increased operational envelopes over the life of the F-35A aircraft for both nations.

Now, what about those alligators and hurricanes, you ask?

Blyth laughs as she recalls driving home from Eglin Air Force Base one afternoon. “Imagine my surprise as I drove past the local lake near our house and there by the side of the road was a huge alligator snapping at the tyres of passing cars…I did a double-take, shook my head and thought to myself: Seriously, Florida?”

As for hurricanes, Blyth has dramatic tales to tell. As Hurricane Michael headed their way, Regina and family evacuated to safer territory. The category 5 hurricane wreaked tragic damage on Tyndall Air Force Base and Panama City, about an hour to the east of Eglin. More recently, the Blyth family hunkered down and rode out category 2 Hurricane Sally, which made landfall about an hour's drive to the west. “Hurricane Sally generated many local tornadoes, which is the really scary bit, as they are unpredictable, destructive, and spin up incredibly quickly. Imagine a family of five at four in the morning huddled in the cupboard under the stairs like some bizarre, surreal scene out of Harry Potter! Never a dull moment!”

Fighter jets, alligators with attitude and hurricane adventures aside, Blyth is looking forward to returning to DSTG to continue delivering work that has meaningful impact for Defence. Adding to her commitment to STEM outreach, Blyth plans to resume volunteering her time through the CSIRO STEM Professionals in Schools program. Blyth is one of six female DSTG scientists and engineers who have applied to be part of the 2021-22 Superstars of STEM (#SuperstarsofSTEM) program*.

“Being an influential and visible female aerospace engineer is important to me," says Blyth. “American Civil Rights activist Marian Wright Edelman said, "You can’t be what you can’t see…". Diversity and representation matters.”