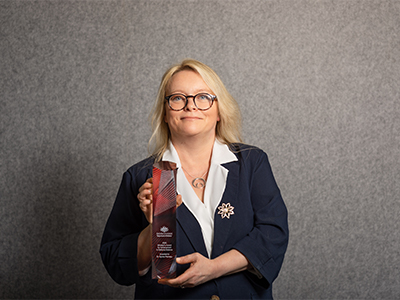 Defence Scientist, Dr Sylvie Perreau, has been awarded the 2020 Minister’s Award for Achievement in Defence Science, for her excellence in signal processing and wireless networks within highly classified environments both nationally and internationally.

“Dr Perreau has made significant contributions to the protection of Australian Defence Force personnel, contributing to Defence capability both technically and through liaison roles”, Minister Reynolds said.

“As a member of the Science in Australia Gender Equity Self-Assessment Team and Defence Science and Technology Group’s Disability Inclusion Group, Dr Perreau exemplifies Defence values and behaviours and is an all-encompassing member of the Defence workforce.”

Minister for Defence Industry Melissa Price, who presented the award, said Defence scientists have been integral to supporting our capability edge for more than 100 years.

“The ability to devise innovative solutions to address complex Defence challenges is a rare talent, and the contribution that Defence scientists make is vital in safeguarding our nation,” Minister Price said.

The Minister’s Award for Achievement in Defence Science was established in 1988, for information on previous recipients visit https://www.dst.defence.gov.au/discover-dst/our-high-achievers.

This media release originally appeared on the Department of Defence website.