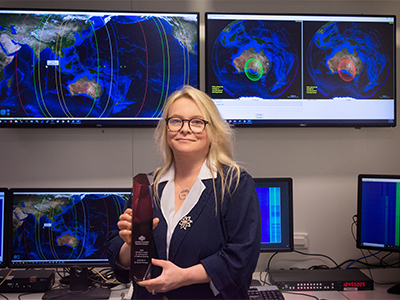 Dr Sylvie Perreau, recipient of the 2020 Minister’s Award for Achievement in Defence Science, is focused on keeping wireless communications up and running in hostile environments.

Whether it is incidental interference from the physical environment (signal reflections, refractions and echoes from buildings, vehicles or trees) or intentional hostility from adversaries using jamming technology, Perreau has created algorithms and architectures that allow wireless signals to be successfully understood by their intended recipients.

Commencing this research as part of her PhD, Perreau initially developed signal processing techniques to restore mobile phone signals distorted by the physical environment. Since joining DSTG she has focused on devising robust algorithms and architectures that counter jamming, improve the security of wireless communications and enhance wireless communications situational awareness.

From Paris to Adelaide

Perreau was born in Burgundy, France, and grew up in Paris, where she studied electrical engineering. “I’ve always loved mathematics but was not very good at the practical design of circuits and things like that,” she admits. “So I decided that signal processing, the subject closest to pure mathematics, was my thing.”

She went on to complete a Masters degree in signal and image processing and a PhD in Signal Processing for Telecommunications. The PhD was funded by telecommunications company Alcatel, at the dawn of mobile phone technology, and her topic was ‘blind equalisation’ of wireless signals.

These days we take it for granted that we can make a mobile phone call from almost everywhere; we spare little thought for the complex maths required to keep the signal healthy, especially in urban environments where the receiver gets multiple distorted versions of the original signal. Equalisation algorithms create robust signals on the way out and reconstruct and restore the signals when received. Through her post-graduate studies, Perreau eventually became a subject matter expert on Hidden Markov models, a mathematical technique originating in image processing that proves valuable for blind equalisation.

After discovering a group of Defence scientists researching exactly the same equalisation problems, Perreau accepted a PhD internship at DSTG Edinburgh for three months in 1995. After completing her PhD, Perreau joined a researcher in the US who was developing a completely different technique for equalisation. The pair co-authored a paper comparing the different technique performances and gave guidance on when each technique should be used. That 1997 paper has become the landmark paper on blind equalisation. It’s been cited over 700 times and is still being cited today.

Perreau eventually returned to Adelaide to take up a senior lectureship at the University of South Australia’s renowned Institute for Telecommunications Research. Here she continued her focus on the practical applications of her algorithms, architectures and protocols for mobile telecommunications.

“At this time, data was being added to voice over wireless networks, making the bandwidth challenge harder (and more interesting at the same time). I commenced my second big career research focus – how to modify existing network protocols that had been designed for fixed wired networks so they could work with lossy wireless channels. In parallel, I kept working on this problem of interference mitigation using multiple-input, multiple-output techniques, initially from the perspective of mobile channel interference. But in the back of my mind I was always thinking of the problem of intentional interference (jamming) and how one would design to counter that.”

As time went on, Perreau continued to work with DSTG on communication protocols, and eventually decided to take up a full-time position as a defence scientist in order to really understand what the problems were and how to apply her research.

“Joining DSTG definitely improved the outcomes of my research. I was very keen to get started talking to clients, understanding what their problems were, and then get a team together to work on these classified problems.

“The results are something I'm very pleased with. I started this research area from the ground up, building a team after extensive dialogue with clients. From my experience dating back to my PhD days working with engineers with Alcatel, then to my time at UniSA working for industry stakeholders, I know that sometimes, clients think we just want to write our crazy equations without really understanding their problem. Over a period of time, when I started working with Defence clients, I focused on building the relationship, and trust. There was not necessarily a lot of science happening initially, but the work we did was really helpful for them. We went from nothing to S&T that's been useful in operations.”

“What I really enjoy in my work at DSTG is the teamwork. We have physicists, engineers, computer scientists, technical officers. It's not just about me coming up with an idea – it’s having a whole team that's building a useful tool that we can see really works. I wouldn’t be happy just doing mathematics for the sake of coming up with new theories. My motivation is to see with my own eyes that what I'm doing is useful.”