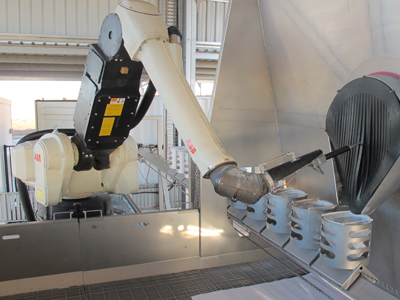 A team that ensures military equipment that is no longer required is made safe by removing explosive material has been recognised at the 2021 Comcare National Work Health and Safety Awards.

Defence technicians were named joint winners of the Prevention Award in recognition of their efforts to enhance the safety of personnel involved in the processing of ordnance such as aircraft bombs and artillery shells.

The establishment of what is known as the Semi-automated Explosive Ordnance Inerting Capability has made the handling of explosive material much safer through the introduction of a high degree of automation.

The need for humans to be exposed to hazardous situations has been largely removed, and what was previously an extremely physically demanding manual task is now carried out by a robot.

"The recognition means a great deal to everybody that's been involved, not only because of the hard work that's been undertaken by each individual team member that's contributed to the development of this but also because of the close collaboration with our industry partners," says Shane Dew, who leads the Advanced Ordnance Technologies team within Defence.

"The award means a lot because of that successful collaboration, the successful design and development of the capability, but then also being recognised for enhancing safety to support the whole of Defence."

The design of the new facility, which is located at the Woomera Test Range in South Australia, was fine-tuned in a 3D environment. The site was first built in the virtual world, with all of the moving parts animated, so that improvements could be made before construction of the physical facility started.

The key concept driving the design was the need to remove humans from hazardous situations as far as possible by replacing them with a robot. But this innovative capability goes beyond merely enabling remote handling of explosive material by human operators.

"We've integrated a level of intelligence into the system where the computer recommends the most efficient way of extracting the explosive material, rather than using the robot to carry out a repetitive process," Mr Dew explains. "For every new piece of ordnance that goes up there, the computer will actually design a new way of doing business."

The ordnance-processing system is capable of operating semi-autonomously. Working within pre-set parameters, the computer will determine how best to complete a given task. The human operator will review the plan, make changes if necessary and then give the system the go-ahead.

This new facility has not only significantly improved safety. Environmental management has been enhanced, and the ordnance-handling process has been made substantially more efficient. A task that would previously have taken personnel about six to eight hours to carry out manually now takes less than one and a half hours to complete.