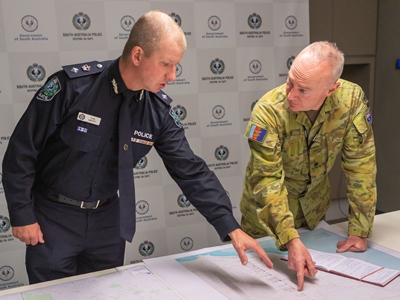 Defence and national security agencies have enlisted the services of Australian researchers to explore how artificial intelligence can be used to improve military decision-making.

Senior Defence researchers, Dr Darryn Reid and Dr Simon Ellis-Steinborner explain that in a Defence and national security context, decisions can have serious tactical and strategic consequences, both with a potentially profound cost.

“There are occasions where these decisions need to be made in highly uncertain situations, sometimes with limited data and information,” Dr Steinborner says.

“We want to give our military leaders and national security experts every chance to make the best decision every time.”

The initiative is part of a broader set of research and innovation activities aimed at building sovereign capability in artificial intelligence.  Australia has some world-leading AI capabilities across universities, research organisations, and industry, and it is this expertise that the AI for Decision-making initiative was designed to tap into.

A collaboration between Defence and ONI, the focus of the initiative is to enable commanders and national security officials to make robust decisions quickly.

“The ability to make well-informed, decisions based on accurate, up-to-date data and intelligence before our adversary can be the difference between success or failure,” Dr Ellis-Steinborner said.

The initiative which kicked off in March 2020 has already uncovered promising research in a number of areas including facial recognition and intelligence gathering from text data.

Dr Ellis-Steinborner says that despite being a fairly modest program in the scheme of things - it has a budget of approximately $5 million - it has the potential to deliver an enormous impact in terms of technological capability.

“Our return on investment could be considerable,” he said.

“Especially if you consider the sovereign capability that we are developing.”

The original intent of the initiative was to fund a large number of low-value projects to explore as many ideas as possible across the Australian R&D community.  The most promising of those projects were then invited to apply for a second round of funding to further develop their technologies.

According to Dr Reid, the initiative has succeeded in identifying and building a community of AI researchers, none of whom have been involved in the Defence or national security space previously. The result is a portfolio of relatively small investments across a spread of both application-oriented and investigation-oriented topics, all linked together by the research themes of anomaly detection, machine reasoning and planning, and machine knowledge generation.

“We have introduced an entirely new cohort of researchers to the unique challenges faced by Defence and national security agencies,” he said.

“They bring with them new ideas and fresh perspectives that will help us tackle these challenges from all angles.

Dr Reid also points out that the initiative has succeeded in bringing together previously disconnected researchers who had been working in isolation.

“We’ve identified connections across a number of the projects.  Sometimes that’s all it takes to advance research capability: to pair activities with complementary activities.”

Researchers report on their research in November at which time Defence and national security experts will assess all proposals to determine if further development is warranted.