Sharing a love of STEM 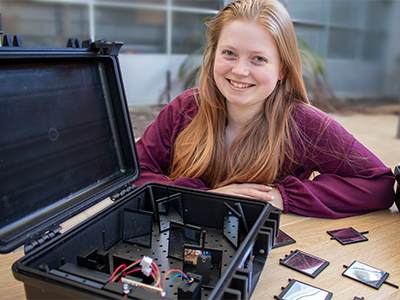 Since joining DSTG as an Optoelectronics researcher, Lily Taylor has regularly shared her passion for optics and laser physics with primary, high school and university students. However, she noticed a lack of portable, ready-to-use aids for outreach workshops, particularly in relation to the study of light and understanding how light behaves and interacts.

“Optics is such a valuable field of study and research, and I wanted to get students interested and engaged in lasers and optics.”

So armed with a great idea and a can-do attitude, she created a portable laser teaching kit that can be used as a tool for engaging students of all ages in optics.

An early prototype of Lily’s optical “maze” generated a high level of interest and enjoyment from students, so she investigated what was involved in designing a more permanent solution.

“I took the idea from the prototype and brainstormed what it would take to make a more permanent kit.”

She managed to source funding to turn her idea into a reality and soon had a kit ready to be debuted at the STEM Aboriginal Student Congress earlier this year.

Lily’s laser maze consists of a set of mirrors, a laser and accompanying electronics. Students adjust the mirrors to guide the laser light through the maze. On successful completion of the maze, students trigger an LED to change colour. An acrylic viewing panel ensures the laser is safe for use.

“My kit is not about trying to convince students to study STEM, but allow them to explore their interest and build confidence so that if they decide they want to pursue STEM, they are more likely to feel that it is something they can pursue and achieve.”

After trialling the prototype kit at several STEM events, Lily reports that the usual hesitancy of students disappeared and they were excited to try the maze, discuss how to solve it and try to understand why things worked the way that they did.

“Even before the new kit was fabricated, we had received requests for use in a number of events.”

“Coming from a rural background myself, I understand that opportunities to explore interest in STEM outside the classroom are limited. It is my goal to provide opportunities to students so that they can make an informed decision about whether they would like to pursue STEM in the future. “

The success of her laser maze saw Lily selected as a finalist in the 2021 Winnovation Awards, which, fittingly, showcases female change-makers and future role models who are driving innovation in their profession.