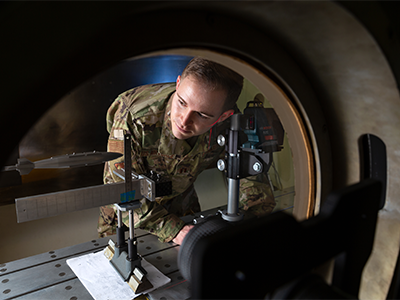 An international engineering placement with Defence has culminated in the achievement of an Australian first.

Defence scientists have demonstrated a new imaging technique in the Transonic Wind Tunnel at Fishermans Bend, thanks to the dedication of international exchange engineer Captain Paul Gulotta of the US Air Force.

Known as particle image velocimetry (PIV), this method uses lasers to build up a picture of how air flows around objects. This significant technical achievement enhances Australia’s ability to ensure that fighter aircraft can safely carry and release bombs and other stores.

CAPT Gulotta is one of just eight US personnel selected in 2018 to take part in the Engineer and Scientist Exchange Program, which promotes international co-operation in military research, development, test and evaluation between the US and its allies.

Given his background in experimental aerodynamics and hypersonics, he was the perfect match for a request from Defence Science and Technology Group (DSTG) for an engineer to help with extending its PIV capability.

CAPT Gulotta arrived in Melbourne in July 2019 to begin his two-year placement. He was struck by the depth of knowledge and science-and-technology experience of his new colleagues; nonetheless, his own research background stood him in good stead to make a substantive contribution to this important area of work.

PIV is a flow-measurement technique that involves capturing high-resolution images of small aerosol particles within a moving fluid in order to track the velocity of that fluid. The subject of testing was a model of a GBU-31 – a Mk 84 bomb fitted with a Joint Direct Attack Munition (JDAM) guidance kit.

“We had existing hardware for particle image velocimetry which we used in the Low-Speed Wind Tunnel,” CAPT Gulotta explains. “My job was to adapt that hardware for the Transonic Wind Tunnel environment, which was a pretty big engineering challenge.

“We started with a literature review, looking at transonic tunnels around the world to figure out what an appropriate design for the system might be, and then interviewed a number of people from those facilities to figure out the ins and outs of a potential system.

“From there, we were able to develop a capability concept and then go through a whole bunch of safety documentation to implement the laser and to get approval to use aerosol particles in the Transonic Wind Tunnel.”

The research project culminated in testing that ran for about a month and a half. Crucially, this work is not purely theoretical; it has direct relevance to an ongoing collaborative effort to clear weapons for carriage by the F-35A Lightning II. Australia and the US are working together on this significant endeavour.

According to Peter Manovski, who supervised the PIV project, the placement was a huge success not only because of CAPT Gulotta’s engineering work but also due to the professional qualities he brought to the Defence team.

“We’ve been really fortunate and really proud to have Paul on board,” says Manovski. “He’s really brought a different perspective from his military training and leadership training.

“He’s instigated a few initiatives that we have continued here that are separate to the research, like helping us with project management. It’s been really great in terms of his attitude to work; he’s always willing to help out. We wish he could have stayed longer.”

After leaving Defence in July, CAPT Gulotta returned to the US for a posting to Hill Air Force Base in Utah.