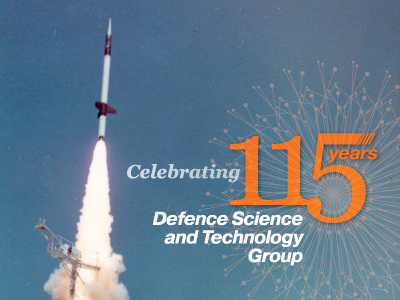 When Australia's first defence scientist, Cecil Hake, set out to create a national factory to manufacture the gunpowder replacement cordite on 15 April 1907, he could not have known that he was laying the foundations for one of the world's great research institutions.

But just seven years after his first baby steps, with Australian troops heading to the World War I battlefields of Western Europe and the Middle East, Hake's tiny lab in a bluestone guardhouse at Victoria Barracks in Melbourne had become a rapidly expanding complex in the then-outer suburb of Maribyrnong, ensuring that Australia was self-reliant in munition productions.

The Defence Science and Technology Group (DSTG) is now the second-largest publicly funded research agency after the CSIRO, but still has Australian security - and the servicemen and women who provide it - at the heart of everything it does.

That aim requires close collaboration with Defence services and a full understanding of their needs, requirements and the theatres of operation in which they work or are likely to work.

Read the full story on the Defence News website.