Experts explore the future of quantum computing in Defence 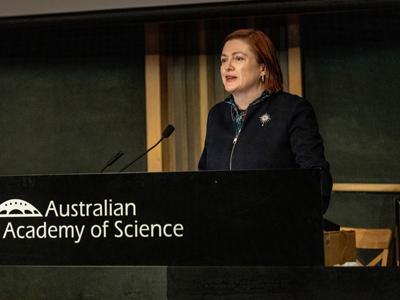 Defence recently gathered some of the biggest names in quantum computing to explore the future of this transformational technology for Defence and national security.

Over two days at the Shine Dome in Canberra and virtually, more than 90 delegates from academia, industry and government joined the latest Emerging Disruptive Technology Assessment Symposium (EDTAS) to explore the potential impacts of quantum computing technologies for Defence.

The breadth of the quantum community was well represented with participation from 6 countries, 10 Australian universities, 17 industry organisations and 8 government departments.

Chief Scientist, Dr Cathy Foley; former Australian of the Year, Prof Michelle Simmons; Dr Jay Gambetta, from IBM Quantum in the US and Prof Rodney Van Meter from Keito University in Japan were just some of quantum experts to participate.

In welcoming delegates to the symposium, Australia's Chief Defence Scientist, Prof Tanya Monro, acknowledged the potential of quantum computing to fundamentally transform Defence capability and the national economy, noting that quantum computing has been designated as a national critical technology.

"I'm very focused on making sure that being designated as a critical technology doesn't mean restrictions and hurdles," she said.

"If something is a critical technology there's clearly going to be ways we have to handle it to make sure that we protect Australia's interests.

"But there equally should be great opportunities for support, investment, et cetera to help make sure there's not a disincentive for our researchers and innovators and entrepreneurs to work in areas that are designated as critical."

Australia's quantum researchers going above and beyond

In her keynote address to the symposium, Chief Scientist Dr Cathy Foley recognised Australia's place as a global leader in key areas of quantum computing research, noting that while Australia is only 0.3% of the world's population, it is conducting more than 4% of the world's quantum research.

"We have this amazing community here which is very large considering the size of our population, it's very focused, it's very coordinated."

In particular she noted the very high standard of the research.

"If you look at, say, a measure of citations, as they're normalised in this particular area, we are 60% above the global normal. That's saying we're doing high quality work."

A key component of the symposium was the futures workshops. These workshops were used to generate innovative concepts for future quantum computing technologies and capabilities. Syndicate groups comprised diverse representation from across industry, government and academia to ensure cross-pollination of ideas and group diversity.

To encourage conceptual thinking, participants were presented with a hypothetical scenario in which a solar flare has disrupted Australia's essential services and national systems. Participants were forced to consider how quantum computing may be used to prepare for and to protect against such an event.

Insights from the symposium were captured and will be explored further in a follow-on Military Implications workshop in October.

The EDTAS series is an important mechanism for Defence to better understand emerging technologies and their trends. EDTAS is used to identify novel capability concepts for Defence beyond 2040, and in the process, help to uncover the important research challenges and opportunities that lie ahead, which require awareness or action by government, academia and industry.

The EDTAS series, fully funded by the Next Generation Technologies Fund, provides a mechanism by which Defence can engage the national S&T enterprise to develop a comprehensive and evidence-based understanding of emerging and potentially disruptive technologies, to avoid strategic surprise, protect capability advantage and exploit future opportunities.

Defence thanks the following for helping to deliver the Quantum Computing EDTAS event: