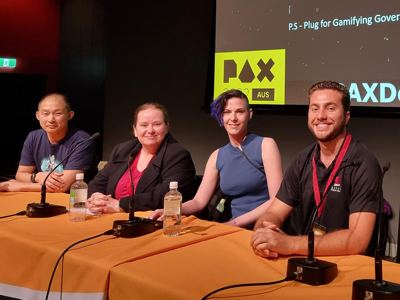 PAX Aus is a celebration of gaming and gaming culture, featuring panels, game demos, tournaments, STEM initiatives and an expo hall filled with publishers and independent studios. Held this year from October 7 – 9, in Melbourne, PAX Aus 2022 attracted just over 80,000 attendees from around Australia and internationally.

Mr Rohl presented on his team's work regarding the application of cutting-edge data-science research and machine-learning techniques to automatically determine the functional roles of military cyber assets.
"Our research is being applied to both dynamic enterprise systems, as well as static, bespoke systems, in a military context," he said.

"Under the hood, networked games share enough similarities to real systems to enable fundamental research at the unclassified level, while also allowing universities, students, and industry to participate in the work," Mr Rohl explained.

Dr Whitney spoke about her work within the serious games field and human sciences. Serious games are those used for non-entertainment purposes, such as training, teaching, or practising a skill (think Microsoft Flight Simulator). More and more, games and gaming technology are perceived as the preferred training tool by younger generations, and there is considerable enthusiasm for their use to support military training. However, this doesn't always mean they translate seamlessly into training tools.

"Games and games technologies may have training potential but it's important that decisions about the use of games and gaming technology are informed by evidence," said Dr Whitney.
This is at the heart of Dr Whitney's research. "We need to understand if the technology works, and how best it can be employed," she explained.

Defence scientists are using and investigating games-based technologies for everything from training and simulation, to research and innovation, and in doing so are raising Defence's profile in Australian cyber- and technology-related industries. They are also opening doors for engagement with future talent, and collaboration and partnerships at large.

Over 200 people attended the Defence panel session which included great audience interaction with the panellists through the #PaxDefence hashtag. For the Defence science panellists, a highlight was speaking to STEM students after the event.

"I spoke to some Honours and PhD students, who were so excited to think that there could be an opportunity for them to work in Defence," said Dr Whitney. "It's so important for us to grow the next generation of researchers, so this was a really great opportunity to engage."