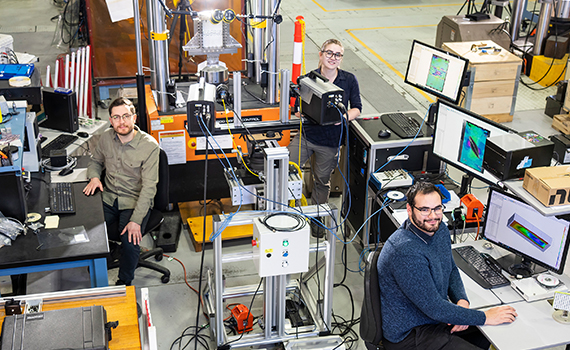 In the Fatigue and Fracture Laboratory where this testing has been taking place (L-R): Patrick Frezza (ACS-A), Claire Dunne (RMIT University), and Lachlan Burgess-Orton (DSTG).

The MQ-4C Triton Unmanned Aircraft System (UAS) is a high-altitude, long-endurance aircraft that will be used by the RAAF for maritime patrol and other surveillance roles. Triton is equipped with a sensor suite that provides a 360-degree view of its surroundings for over 2000 nautical miles and is able to support missions up to 24 hours in duration.

The Triton, which has a wing span similar to a Boeing 737, is expected to join the RAAF fleet in 2024. In preparation for its entry into service, defence scientists are studying the composite materials which form a large portion of the Triton's makeup, and how the surface handles impact damage (examples of this vary from dropped tools during maintenance to bird strikes during flight). This can be experimentally replicated by impacting small samples of material with well-defined amounts of energy, then studying the damage and its effects on the panel's residual strength. Developing the material understanding at this small scale informs the future design and testing methodology of larger composite specimens, with each new specimen iteration progressively approaching a better representation of the full complexity of an aircraft component.

Lachlan Burgess-Orton (DSTG), Patrick Frezza (ACS-A), Greg Beziuk, Claire Dunne and Michael Forsey (RMIT University), and Kasi Metcalfe and Loc Tran (QinetiQ) have used multiple ultra-high-speed cameras and digital image correlation (DIC) techniques to gather three-dimensional strain data of composite panel surfaces as they fail under compressive loading. Prior to testing, the test specimen had been painted with a randomised black dot (speckle) pattern against a white background. The DIC imaging system monitors the change in distance between the dots (at a prescribed frame rate) and then calculates strain as the specimen is loaded and deformation takes place. Together, the team developed an optimised speckle pattern and test setup that would enable both high speed and low speed image data to be captured from the same test. This high-speed strain imagery is a rich source of information for researchers trying to model failure of composite structure.

Three pairs of cameras have been used in this test to capture strain data using three-dimensional DIC. Two pairs of low-speed 12MP Basler cameras are positioned facing both the front and rear of the test material ("coupon"), each recording at 20 frames per second (FPS). A pair of Shimadzu HPV-X2 cameras were then positioned facing the impacted face of the coupon to capture ultra-high speed (UHS) DIC footage at the instant of failure. The Shimadzu cameras used in this setup have extremely fast capture rates, up to 5 million FPS in full-pixel mode, but are limited by a very small memory storage – a maximum of 128 frames. 'We have a very narrow window that [the failure] can be captured,' explains Lachlan. 'And the moment of interest is also over in a flash. So our challenge has been to design a special triggering system which interfaces directly with the camera and test rig with minimal signal delay.' Naturally, extremely precise triggering of the UHS DIC was required and this was achieved using custom hardware designed by Greg Beziuk, and further built by him at DSTG. The trigger is a special box of minimally filtered electronic components providing a direct link between the camera and the test machine load cell. Using it, the team has successfully captured the failure of a composite test sample in compression at 350,000 FPS, measuring surface strains in 3D as well as recording the 3D topology of the specimen as it fails.

As the test specimen had also been instrumented with strain gauges on its front and back faces, the correlation of the DIC strain fields to strain gauge data is then able to be determined. This is useful, as it can be used to assess the accuracy of the DIC results in composite specimens and can also indicate the representative nature of the UHS strain fields at the point of coupon failure. The use of 3D DIC, both at low speeds and ultra-high speeds, for recording full-field coupon surface strains during a composite compressive failure event coupled with this optimised experimental mechanical test setup will contribute to an improved understanding for this type of failure.

'We see the strain hot spot just before the crack appears, and watch it grow during failure in 3D,' says Lachlan. 'It's the first time in the Southern Hemisphere that two Shimadzu HPV-X2 cameras have been used to capture a failure event [using 3D DIC at UHS], so it is very exciting. Both cameras are owned by DSTG, so we have now also delivered this as a capability to DSTG. We've been very happy with how it has worked.' 'The Triton is a very large asset made of a lot of composite components,' says Lachlan. 'Our team is also doing modelling and structural investigation to position DSTG to provide advice to the RAAF about how to manage the aircraft in service.