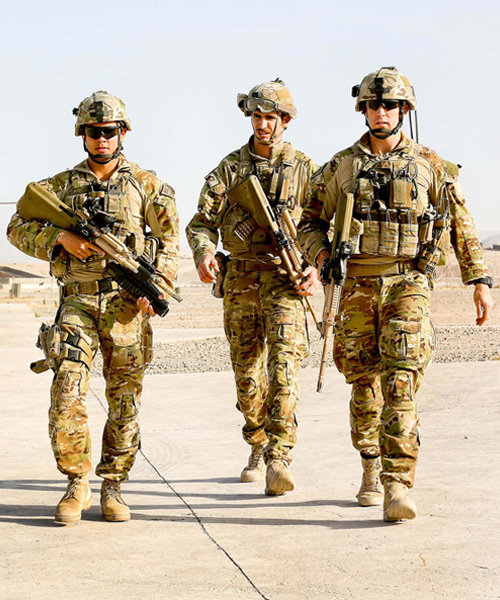 DST Group was asked to conduct research on the body armour systems worn by frontline personnel to establish whether these were being used and worn the best way.

A new lightweight type, the Tiered Body Armour System (developed over a two-year period), was presented to Australian troops in Afghanistan for operational use in 2011. This consisted of a Tier 2 variant for dismounted close combatants and a Tier 3 version for general combatants.

The research involved conducting questionnaires and focus groups with troops to gain assessments of the armour systems they wore. This assessment activity was the next stage in an ongoing cycle in which the lessons gained from using equipment on operations informed future design and use of the system.  DST had previously supported the development of the system with studies ranging from thermal loading, physical mobility, and the protection of vital organs as well as optimising the design based on survey measurements of the size and shape of Australian Defence Force (ADF) personnel.

The team also visited three forward bases and observed dismounted close combatant troops in seven different operational roles as they prepared for and carried out their normal tasks. The researchers made written records and took photos of what each soldier had on and stored in each pouch. Since soldiers are being asked to carry increasing amounts of gear, knowing what items they already carry was seen to be essential when determining what extra items, if any, could be added, and what excessive items were not required.

As a result of the research, minor adjustments were suggested to the design of the Tier 2 Vest and several of the soldier combat ensemble pouches.

The work was undertaken by a Fly Away Team as part of Diggerworks, a virtual organisation formed by the Defence Materiel Organisation, Army, the Capability Development Group and DST.

Its purpose is to identify options and deliver integrated soldier combat systems solutions in order to enhance the capability of the combatant. This is facilitated through interactions with frontline personnel to ensure that Australian troops are always optimally equipped for warfare on today’s fast-changing battlefield.

A major challenge facing Diggerworks is the need to provide dismounted soldiers with armour and gear for a wide range of tasks while not burdening them to the point that their operational effectiveness is compromised. As well as giving consideration to the physical burdens placed on troops, Diggerworks is also looking at the cognitive burdens they have to manage.