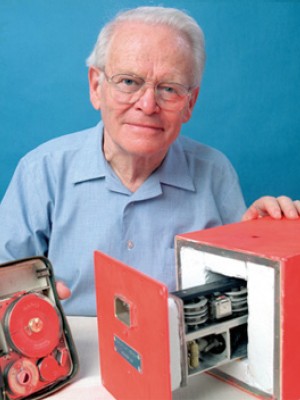 David has also served in many voluntary positions, including as chairman of the Combustion Institute (Aust & NZ Section) for 25 years (1958-83), and as a committee member of the Chemical Society, the Institute of Fuel, and the Australian Institute of Energy.

David's other interests have included lecturing and organising meetings for the Council of Adult Education, Probus Groups, the Forum Society, the Rationalist Society, and the Morris Minor Car Club of Victoria, of which he has been founding chairman and patron for 25 years (1977-2002).

While a student at the University of Sydney, David met Ruth Meadows, who became his wife and lifetime supporter. Together, they have raised a family and shared an interest in science and education, arranging many educational tours in conjunction with international conferences. Now retired, David and Ruth live in Caulfield South, Victoria, in regular contact with their four children and seven grandchildren.

In recent years, David has received a number of awards in recognition of his contributions to aeronautics and energy research, including:

In 2002, he was officially recognised in the 2002 Australia Day Honours list, being appointed an Officer in the General Division of the Order of Australia for his "service to the aviation industry, particularly through the early conceptual work and prototype development of the black box flight data recorder".