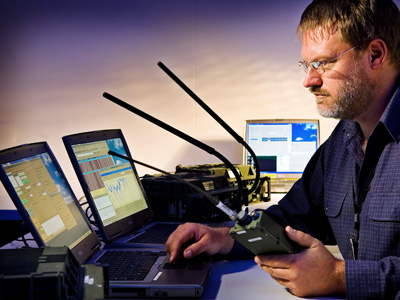 The Quantum Technologies group undertakes research in the areas of Quantum Sensing, Quantum Navigation and Timing, and Quantum Communications.

Quantum Technologies can be defined as those technologies that rely on the quantum mechanical principles of entanglement and superposition. The group is focused on the second quantum revolution which involves the application of the rules derived from the first quantum revolution to develop new materials and applications that go beyond the limitations of classical physics.

Examples of these technologies include quantum radar, quantum-based navigation and timing systems, and quantum key distribution. The majority of this work is currently being carried out through the Next Generation Technologies Fund in Australian universities and industry.

The RF Signal Analytics group conducts client-focused R&D to support the capture, processing and exploitation of modern RF signals that are representative of an increasingly dense and complex electromagnetic environment.

This work is directed at RF spectrum awareness applications and includes the development of real-time, ultra-wideband digital RF capture systems using a mix of FPGAs, GPUs and CPUs as signal processing engines. The group also undertakes R&D in the theoretical aspects of signal processing, together with the application of machine learning techniques, for RF signal detection, characterisation, including direction finding, and isolation. The development of software-based technology demonstrators forms a core activity for the group, with an emphasis on the design and implementation of high-performance software architectures and tool sets that target RF Big Data problems.