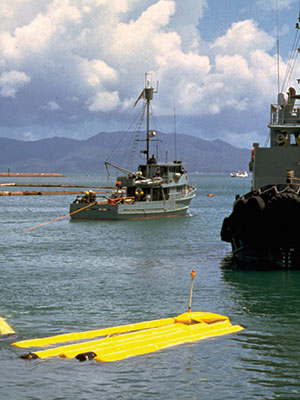 The Australian Minesweeping and Support System (AMASS) developed by what was then DSTO (now DST Group) was the world’s first operational emulation sweep.

AMASS built upon work previously carried out by Defence scientist Mike Turner and his group at Sydney. It was developed to provide a reasonably inexpensive mine hunting and sweeping capability in accordance with the Craft of Opportunity Program (COOP), which sought to develop equipment that would permit a range of small craft, such as tugs and fishing boats, to be converted rapidly into mine sweepers or mine surveillance vessels.

The key to AMASS was the development of dyads, or buoyant permanent magnetic cylinders, combined with water-driven acoustic generators that, when towed behind a vessel in various configurations, could emulate the magnetic and acoustic signatures of a range of vessel classes, and sweep sensitive influence mines to a depth of 90m.

AMASS had several attractions and advantages over other systems — it was relatively inexpensive, required no electrical power, could withstand many mine explosions and had no real competitor.

In 1992, DSTO (now DST Group) and ADI Limited, signed a licence agreement to further develop the system technology. ADI Limited launched the system in mid-1993 with the view of selling it to foreign navies.

The British Royal Navy also acquired the Mini Dyad, which is at the heart of AMASS, and incorporated it into their Shallow Water Influence Minesweeping System (SWIMS) to undergo testing. SWIMS was used in the 2003 war with Iraq to deal with the sophisticated Manta mines in the deep water port of Umm Qasr.

AMASS has been a significant commercial success. The technology behind the system has generated as much as $60.5 million in export sales, which has returned royalties of $3 million to the organisation, which are being used in extending research in this area. AMASS also exemplifies best practice in industry interaction, because it contributes to Australia’s defence capability, engages industry as a partner and mutually shares risk, is genuinely collaborative and generates commercial income and exports.

Mike Turner
For the development of a more flexible concept for minesweeping.