Designed by Swedish shipbuilders Kockums for the Royal Australian Navy (RAN), the submarines were totally designed by computer, and powered by banks of lead-free batteries that are charged by three on-board diesel generators.

DSTO (now DST Group) played a highly significant role in the ‘get well’ and ‘fast track’ programs for the Collins Class submarines during the construction phase from 1993 to 2003. This research has been a major factor in developing the most advanced non-nuclear submarines in the world. Over the last two decades, Defence scientists have assisted with several key developments.

Dr Chris Norwood and his team significantly reduced the noise or acoustic signature generated by submarines during operations at depth and while snorting (the process of running the diesel engines and recharging the batteries).

Dr David Oldfield and his team developed specialised anechoic tiles for the Collins class submarine for signature reduction. Designed specifically for use in warmer waters, the tiles are the acoustic equivalent to camouflage patterns, forming an anechoic coating that reduces the risk of sonar detection.

Dr John Ritter and his team developed a new high-strength steel for the Collins class submarine and advanced welding technology to match, saving Australian industry $17 million. Dr Ritter’s collaboration with the RAN’s Submarine Project Office, the designer Kockums AB in Sweden, the builder Australian Submarine Corporation, and steel producers BHP and Bisalloy Steels, resulted in the acceptance of a fracture control methodology which ensured that optimum resistance to shock loading was built into the new submarines. It also meant that Australian industry was able to perform all steelwork maintenance and repair work for the Collins Class submarine. The innovations of steel and welding technology were at the forefront of submarine steel technology worldwide. 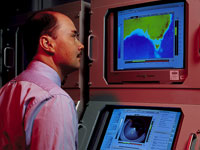 Dr Todd Mansell assisted the RAN and the Defence Materiel Organisation (DMO) in the acquisition and replacement of the combat system for the Collins class submarine.

The Collins Class submarine shock trials were the first to be conducted in Australia on a commissioned submarine. DST received wide and very positive acknowledgments from the RAN and the Australian Submarine Corporation for its efforts and achievements.

Defence scientists investigated the failure mechanisms for hoses on Collins class submarines. The team identified the most likely failure mode and the chain of events after failure. This work received positive feedback from the Submarine Force Element Group, DMO, and Parliament.

Lead-acid batteries have been used as an energy source for submarines since the late 1800s. While these storage devices had proven quite robust in submarine applications, there were problems. Defence scientists have been involved in assessing and improving the performance of the twin-cell lead-acid batteries of the Collins Class submarines by developing sensors and charging systems.

The Closed Loop Degaussing System was developed by Defence scientists in Sydney for the Collins class submarine. The system was designed to counter the effects of stress magnetisation changes in the pressure hull.

Designed and developed by DSTO and later fitted to the Collins class submarines.

SATEPS is an enhancement of the Ping Intercept Passive Ranging System (PIPRS). Developed by Defence scientists in Sydney, the PIPRS prototype was able to determine the range of active acoustic transmissions used to locate possible targets in anti-submarine warfare. The SATEPS was deployed in the Collins class submarines.

DST Group’s Submarine Sonar group conducts research on concepts and systems that have the potential to significantly improve Collins Class submarine sonar performance. The Sonar Processing Laboratory is the main facility for submarine hull and towed sonar data replay and analysis. It is currently the only Australian Defence organisation laboratory where data collected by Acoustic Data Replay Units fitted on Collins Class submarines can be replayed for analysis of submarine operations. This data is critical to evaluating hull sonar performance and investigating advanced processing concepts.

Assisted by Dstl and QinetiQ of the UK, within four months DST developed a sonar wet-end diagnostic system called Wet Nurse that enables defective sonar array sensors to be identified and remedial action taken at sea. Following trials, the system was recommended for inclusion on all Collins  Class submarines

DST developed a new method to assess hull damage that could be caused by a torpedo.

DST undertook studies of the trajectory of flares and markers launched from a submarine’s submerged signal ejectors and the likelihood of their re-contact with the boats.

Defence scientists developed an exhaled breath analysis technique to determine submariners’ exposure to particular contaminants in sealed environments without access to fresh air. Similar to police breath-testing, the technique is able to measure absorption through the lungs and skin and has been used with excellent results in the Collins Class submarine. The technology is not only expected to result in a safer working environment but also extend the operational capability of the submarines.

Defence researchers developed a unique smoke modelling facility to simulate the spread and clearance of smoke in the Collins Class submarine. Because conducting tests on a real Collins Class submarine would have proven too difficult and far too costly, a 1/15th scale clear plastic model of the submarine fitted with scale versions of the living quarters, electrical cabinets, machinery, torpedoes and air conditioning system was designed and constructed by Boeing Australia. This model was then used to simulate the outbreak of fires in various locations throughout the submarine.

In 2005, DST and ASC Pty Ltd signed a three-year industry alliance agreement to improve submarine-related technology and innovation. This alliance will initially focus on technology innovations in the areas of noise and vibration, hull and structural integrity, enabling technologies, asset management and systems sciences, including systems and sensor integration for the Collins Class submarines. While the submarines are widely considered at the forefront of defence science technology, ASC’s industry alliance with DST will ensure ongoing expert, impartial and innovative application of science and technology (S&T) to ensure the Collins Class remains the best conventional submarines in the world.

Dr John Ritter
For his contribution to the development of high performance steel and welds for the Collins submarine.

Dr Chris Norwood
For his outstanding scientific leadership and his contribution to the management and control of noise and vibration in maritime platforms, particularly the Collins Class submarine.

Dr Todd Mansell
For assisting Navy and DMO in the acquisition and replacement of the combat system for the Collins class submarine.