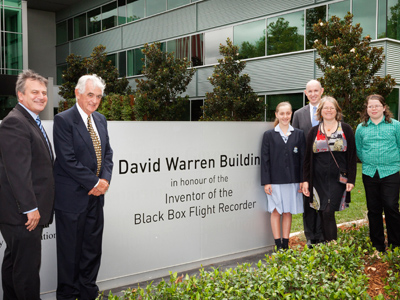 The Australian inventor of the black box flight recorder has been honoured with the naming of a Defence building in Canberra.

The black box is the most famous invention developed in that laboratory, which celebrates its 75th anniversary this year. The laboratory also has a world-wide reputation for pioneering aircraft fatigue testing for which it has won two international aeronautical science awards.

“Although the Australian authorities at the time were slow to see the potential of Dr Warren’s invention, it is now an indispensable part of any aircraft or flight,” Mr Robert said.

“By capturing crucial cockpit information the black box provides valuable lessons in avoiding future accidents and improving safety for millions of passengers around the world.

Chief Defence Scientist Dr Alex Zelinsky said the value of Dr Warren’s work continues to endure not only in aviation but in other forms of transport such as trains, trucks and ships, which have also adopted the black box recorder.

“Over the years DSTO has developed deep expertise in the forensic examination of Defence aircraft accidents and strategies to prevent their recurrence. This is the legacy of David Warren’s work,” Dr Zelinsky said.

Office of the Assistant Minister for Defence

Office of the Assistant Minister for Defence