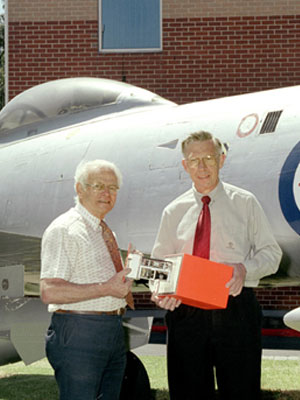 He had seen the world’s first miniature tape recorder, the ‘Minifon’, at a trade fair at about the same time the world’s first jet airliner, the Comet, had suffered a mysterious series of fatal crashes. It occurred to David that if a recorder was carried in the cockpit of an aeroplane, there could be a record of everything that was said in the cockpit up until the very moment of the accident.

David and his team — Kenneth Fraser, Lane Sear and Dr Walter Boswell — spent the next several years developing the technology. A demonstration model of the black box was produced in 1957 and, while not approved by the Australian aviation authorities, was received enthusiastically in Britain, where the device was taken for further development. Subsequently, the British Ministry of Aviation announced that the recorder should be carried on all planes, at least for recording instrument readings at that time.

Following the unexplained crash of a Fokker Friendship plane in Mackay in 1960, the judge at the court of inquiry ordered that recorders be fitted to all future Australian aircraft. Thus, Australia became the first country in the world to make cockpit voice-recording mandatory. Since then, although refined and upgraded, voice-plus-data recording has become mandatory in all major aircraft throughout the world. It has proved invaluable in helping to solve many air disasters and has substantially contributed to aircraft safety throughout the world. In the last four decades, 100,000 flight recorders have been installed in commercial aircraft.

Dr David Warren, Kenneth Fraser, Lane Sear and Dr Walter Boswell
For their pioneering achievements in aeronautical science that had put Australia on the world map.

Dr David Warren
In recognition of his work as inventor of the Black Box flight recorder.

Dr David Warren and his team — Ken Fraser, Lane Sear and Dr Walter Boswell
In recognition of their work on the Black Box flight recorder.

2002 — Officer in the General Division of the Order of Australia

Dr David Warren
For his service to the aviation industry.