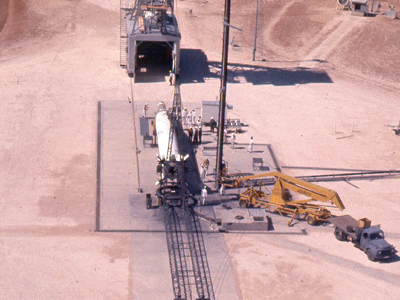 2017 marks the 50th Anniversary of Australia's first venture into space with the launch from the South Australian desert of our first satellite.

WRESAT (the Weapons Research Establishment Satellite) blasted off from Woomera on 29 November 1967 and Australia became the third nation to design and launch a satellite to orbit the earth. WRESAT completed 642 orbits before crashing back to earth.

Design work on WRESAT began in early 1967 as a joint venture between the Weapons Research Establishment (WRE) and the University of Adelaide.

The project aimed to improve the understanding of the effect of the upper atmosphere on climate and weather and assist the US in obtaining physical data for research programs. The project also aimed to develop techniques for launching trials in the European Launcher Development Organisation (ELDO) and British satellite programs, and demonstrate an Australian capability for developing a satellite using advanced technology and existing low-cost launch facilities at Woomera.

The US and the UK provided assistance on the project, including the US Department of Defense, NASA, and the UK's Ministry of Technology.

Using a spare American Redstone rocket from the tripartite Sparta project conducted at Woomera, WRESAT was designed, developed, built and successfully launched in eleven months. It was launched at Woomera on 29 November 1967, making Australia only the third country in the world to build and launch its own satellite, behind Russia and the United States.

WRESAT transmitted scientific information to tracking and research stations around the world for 73 of its 642 orbits. It re-entered the earth's atmosphere and was destroyed by the resultant high temperature on 10 January 1968 over the Atlantic Ocean west of Ireland.

Apart from the experimental data obtained, WRESAT contributed both to the knowledge of the solar-terrestrial relationship and to the studies of atmospheric composition. The project also presented an opportunity for a united approach to a scientific problem with demanding requirements. Such was the interest in space technology that the WRESAT prototype was exhibited in Parliament House, Canberra, and at the London Trade Fair in 1968.

Fire across the desert

To coincide with the 50th anniversary of WRESAT, DST is proud to release Fire Across the Desert in a new digital format. Fire Across the Desert was written by Peter Morton and first published in 1989. It is an extensive account of the Joint Anglo Australian Project that led to establishment of the township Woomera and the missile testing range that helped shape our defence and contributed significantly to space exploration. The digital version of Fire Across the Desert can be accessed on our Publications page.

Today, Australia is back in the space race with the launch of state of the art miniature satellites, or cubesats. The Buccaneer cubesat, developed through a partnership between DST and the University of New South Wales, is scheduled to be launched on 10 November 2017 from Vandenberg Air Force Base in California. Unlike WRESAT, Buccaneer is a cube satellite, the size of a toaster whereas WRESAT was much larger, about the size of a small household refrigerator. The goal of Buccaneer's first mission is to test key technologies in preparation for the subsequent main mission. The main mission, to be launched in a few years' time, will perform calibration activities for Australia's over-the-horizon Jindalee Operational Radar Network. Both WRESAT and now Buccaneer are designed to help us understand the outer atmosphere better, in particular the Ionosphere which plays a key role in our world leading over-the-horizon radar capability.

See the video of DST's Dr David Lingard talking about small satellites on our Videos page.

The following web pages are useful sources of information for aspiring scientists, engineers and innovators:

Launch your future, with mini satellites